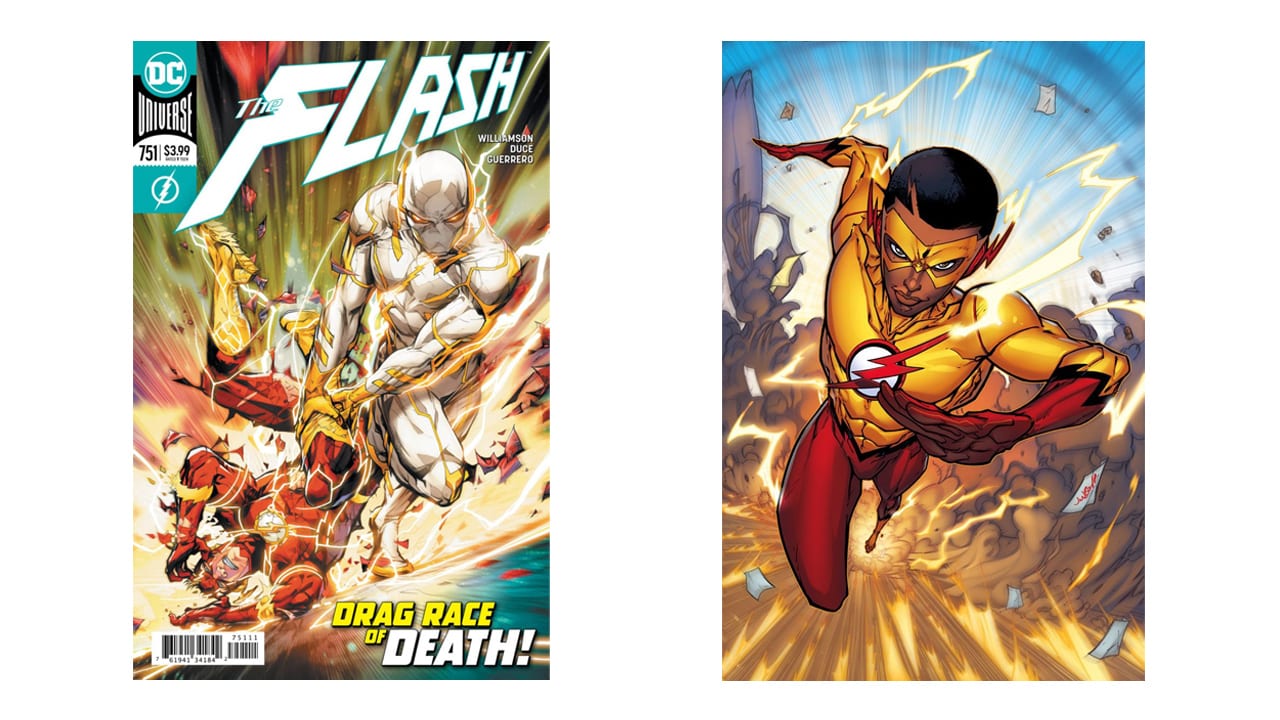 Barry Allen and Wally West are very closely related. And they are the two most popular speedsters in the entire DC Comic Universe. Barry is the second flash, and Wally is the third. As far as their bond goes, Wally is the nephew of Barry’s wife. Wally worked as a sidekick for Barry on many occasions. They both have similar powers. What if a fight broke out between Wally West vs Narry Allen? Who would win?

Wally West would win. Over the years Wally trained himself day and night. He is faster, has a greater alliance with otter superheroes, and is more adept at tapping into the Speed Force.

In the DC universe, we did see them engage in a fight, where Wally won. But that is just one incident. It doesn’t mean Wally is more powerful than Barry. In this article, we will first look at the background of both Wally and Barry. In the last part, we will pit them against each other and see who is the stronger one.

How Fast Is Wally West?

Wally West or Wallace Rudolph West is the fastest character to play the role of Flash. In the DC comic Universe, he is depicted as the third flash and named Kid Flash. Wally West or Kid Flash has the ability of super speed. We first got to see him in the comic Flash #110

He started working with his uncle, Barry Allen, as a sidekick. If you remember, Barry Allen is the second flash and the founder of the superhero alliance Teen Titans. Barry Allen died in the comic Crisis on Infinite Earths

, which came out in 1985. After Barry’s death, Kid Flash/Wally West took on the role of Flash.

When he was just starting, Wally West used to wear a uniform similar to that of his uncle’s with red and gold colors. He used to compress, and store his costume inside his ring. However, he later goes onto creating a costume out of Speed Force Energy.

Comic fans got to know that his bond with the Speed Force Energy is stronger than ever in the comic DC Rebirth. In that comic, Wally obtains a red, and silver costume that could generate white lightening.

Along with comic books, Wally West has appeared in several movies from the DC animated universe. We got to see him in the Cartoon Network series “Justice League

“. Wally West also made an appearance in the 2010 animated film “Justice League: Crisis on Two Earths

But how did Wally Wet get his superpowers?

He got his superpowers the same way Barry Wallen got his. Wally West is the nephew of Barry’s then-girlfriend Iris West. Iris and Barry later got married. But before that, one day Barry had to look after Wally for some time. But as he was working, he asked Iris to leave Wally with him in his Central City Police Laboratory.

It didn’t seem like a bad idea at that time. But it leads to Barry being exposed to the same electrically charged chemicals that gave Barry his superpowers in the first place. Barry tried to stop this from happening, but he failed. In the end, Wally walked out with the same superpowers, presumably even greater super speed than Barry Allen.

As there was no turning back, Barry offered Wally to work with him, and he agreed. Barry gave Wally a smaller-size outfit of Barry’s Flash outfit.

When Wally was not working as a sidekick for Barry, he was fighting crime in his hometown of Blue Valley, Nebraska. Wally was a great admirer of his uncle and aunt. He wasn’t that close to his parents. His uncle and aunt had a great influence on him while he was growing up. They shaped him into the person we later got to see in the comics.

How Fast Is Barry Allen?

, which came out in October of 1956. Barry Allen is the second Flash in the DC comic universe. The very first Flash appeared back in 1940 and had the name, Jay Garrick.

Being a speedster, Barry Allen has the Superpower of super speed. He is also adept at controlling molecular vibration. He can vibrate so fast, that he can travel through solid objects. The second flash wore a red, and gold costume that was crafted to resist wind and friction. Barry Allen used to hide his costume inside his ring.

Barry Allen was a pivotal character in the DC universe who helped nurture the concept of Multiverse. Barry Allen played an important role in the comic Crisis on Infinite Earth #8

If you are a DC fan, you already know there were three Flashes throughout the entire timeline of the DC universe. The first one was Jay Garrick (1940), the second one was Barry Allen (1956), and the third one is Wally West (1959). Among all these three characters who held the mantle of the Flash, Barry Allen was the most prominent one.

Along with comics, we have also seen Barry Allen appear in many animated movies from DC. For instance, we saw him in the 1967 movie The Superman/Aquaman Hour of Adventure

, as well as in the Super Friends program

Unlike what most people think, Barry Allen was a slow, and lazy person. He started his career as a police assistant. Later he was appointed as a Lead Forensic Investigator. When he was a child, his mother was killed. Police accused his father of murder, but Barry knew his father was innocent.

One day, when Barry was working late, a lightning bolt strikes. It fell on a full box of unspecified chemicals that fell over Barry and completely soaked him. Barry lost his senses right away. When he woke up he realized that he had developed super sense, reflexes, healing, and of course super speed.

When Barry started making sense out of what had happened to him, he made a red costume for him which had a yellow lightning bolt on his chest and dubbed himself as the Flash. Later on, he started fighting crime in Central City, his hometown.

His costume was designed by Ira West; he was the adoptive father of Barry’s girlfriend Iris West. Ira West also designed the ring that stored Barry’s costume. He developed a special gas that made the entire costume fit right into the small ring.

Around the same time, Barry developed the cosmic Treadmill, which was used in many comic books that followed. He used the Treadmill to travel into time.

Wally West Vs Barry Allen: Who Would Win

Now that we have learned about both Barry, and Allen, let us compare them against each other, and see who would win in a fight.

However, during his time as the Flash, Wally spent a lot of time training himself. He uncovered many unknown details about the Speed Force during his imprisonment inside it.  So this makes Wally the more skilled speedster. So one point for Wally West.

Moreover, when judging by their natural mind state, and composure, Wally is more calm and rational than Barry is. Combining this with the fact that he has mastered the art of traveling much faster than the speed of light, Wall is surely the fastest and the most reliable of all three Flashes. Another point for Wally.

Another area where Barry and Wally differ is Barry received training from the police academy. He never was groomed after he got his superpowers. On the flip side, Wally was trained by Batman himself. Moreover, as he had many allies, he went through a rigorous learning phase.

Wally surpasses Barry in terms of the number of his allies. Wally was the leader of the Justice League of America. Moreover, even though Barry Allen was the one who brought together the Teen Titans, with time, Wally grew up to become a core and influential member of this alliance. So another point for Wally.

In one instance Wally West was seen helping Barry come out of the Speed Force. The Speed Force was a difficult, and unforgiving force of nature. It helped many speedsters, including Wally West, travel at lightning speeds. But to escape it, you need to be very fast. Barry was failing to escape the Speed Force, and Wally came forward to save him.

In another instance, Barry got frustrated with his life in the future. He was upset that his life turned out to be like this. But it was his ego talking. No one would ever think about giving up superpowers to live a normal life.

The future Barry plotted to stop the old Barry from going into the laboratory that night when the mysterious chemicals fell on him, that was charged with lighting. Barry was so lost, that his lighting turned blue from white. But despite the future Barry’s relentless efforts, Wally was successful in stopping him.

This whole incident was told to us in the comic, New 52

. This incident exhibits the bravery, and courage of Wally. Also, it shows the respect, and love he has for Barry. So Wally gets another point.

So far Wally has the lead. On the five areas where we compared these two superheroes, Wally received 5 points, whereas Barry received 1.