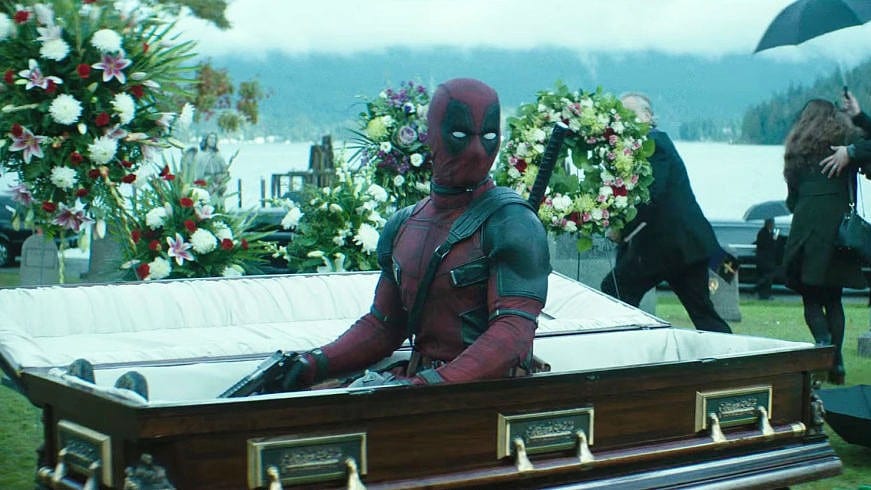 The only characters that have ever killed Deadpool where Thanos and his own daughter Ellie.

It has to be said, till recently, Deadpool really was almost immortal, and only beings capable of killing Deadpool where Lady Death, and other beings stronger than her. But, for now, two times that have changed, and we will show you here when, where, and how.

Deadpool’s primary power is an accelerated healing factor, depicted by various writers at differing levels of efficiency. The speed of his healing factor depends on the severity of the wound and Deadpool’s mental state. It works most efficiently when he is awake, alert, and in good spirits.

Deadpool’s accelerated healing factor is strong enough that he has survived complete incineration and decapitation more than once. Although his head normally has to be reunited with his body to heal a decapitation wound, he was able to regrow his head after having it pulverized by the Hulk in the graphic novel Deadpool Kills the Marvel Universe.

Deadpool’s brain cells are similarly affected, with dying neurons being rejuvenated at a super accelerated rate. This allows Deadpool to recover from any head wounds, and it renders him nearly invulnerable to psychic and telepathic powers, although this ability is inconsistent.

It has been revealed that at the time his healing ability was given to him, Deadpool suffered from some form of cancer; after the healing factor was given to him, it made his normal cells as well as his cancerous cells unable to die, giving him a heavily scarred appearance beneath his suit.

Deadpool’s body is highly resistant to most drugs and toxins, due to his accelerated healing factor. For example, it is extremely difficult for him to become intoxicated. He can be affected by certain drugs, such as tranquilizers if he is exposed to a large enough dosage. Unlike Wolverine, whose wounds sometimes cause excruciating pain as they heal depending on the severity, Deadpool has some degree of pain insensitivity.

Deadpool is effectively immortal, although he has died several times. He is still alive 800 years in the future when the new X-Force encounters him.

When Thanos found out that Deadpool and Mistress Death share a romantic relationship between the two of them, he cursed Deadpool with immortality, meaning that he can’t die by any means.

In addition, Thanos once declared that Deadpool should “consider yourself cursed … with life!” out of jealousy over Deadpool’s status as Death’s love interest. His enemy T-Ray later resurrected him, under Thanos’ instruction, using an artifact he had given him.

Later, Deadpool was informed that Thanos had placed a curse on him, and tracked Thanos down. He revealed that the only thing keeping Wade alive was his “spell of darkest necromancy”. Although Thanos removed this curse in order to kill Deadpool, he felt forced to immediately bring him back using “a fusion of necromancy and science” in order to request his aid in tracking down Mistress Death, who had gone missing.

That curse that is places on Deadpool can only be undone if Wade Wilson first kills his only daughter Ellie.

So as you can see, not only Deadpool has accelerated healing factor that can resurrect him from complete incineration and decapitation, but also Thanos has put a spell of pure immortality on him. But this is not the only time Deadpool got immortality.

Who Can Kill Deadpool In The Marvel Universe?

There are many characters that can really kill Deadpool in the Marvel Universe (god-like beings, stronger than Death and Thanos), but here we will only point out two characters who really killed him in Marvel Comics, even when he had his immortality curse on him.

As Thanos has put a curse on him, the Mad Titan is the one that can lift the curse and kill him. And he already did that on the pages of mini-series Deadpool vs. Thanos, which you can check out on our Amazon link.

The Curse that Thanos used to make Deadpool “immortal”, as explained within the comic:

Thanos later brought him back using magic and science, but that was the end of Deadpool’s “immortality”.

Eleanor Camacho is the daughter of Deadpool and Carmelita Camacho. Eleanor was raised by Carmelita alone as Deadpool had abandoned Carmelita without knowing she was pregnant. Years later, Carmelita managed to track him down and asked for child support, but Deadpool refused to believe such a beautiful child could ever be his.

So, we know Deadpool is cursed with living forever, after making a deal with the Devil that could only be undone if Wade Wilson first kills his only daughter Ellie.

In comics, Deadpool: The End (which you can check out on our link), Deadpool says Ellie is a plot contrivance, placed inside because someone (they thought about writers) got bored with the status quo. Nevermind those meta-commentaries, Deadpool really loves his daughter. But now, she is 97 years old, and Ellie will soon die. Deadpool doesn’t want to exist in a world where his daughter is no more. So Deadpool wants to kill Death, instead.

But, we all know Deadpool’s plans, they often fail. Ellie comes to stop Wade from killing Death, saying to him that she has lived a full life, and wants to die. She stops Wade with her Deadpool armor — cutting off his legs in the process — and reveals her plan.

Ellie knows it will destroy Deadpool to have to outlive her, so she has a plan for them both to go out… with a bang, and she literally means it. Ellie brings a bomb, but not just any bomb. Make that neutrino bombs tethered to a micro black hole by Mobius chain (whatever it means).

But never mind about science, the bomb will incinerate them both before their brains even register the light of the blast. Then the black hole would swallow the explosion and collapse in on itself. There would be nothing left of Deadpool to regenerate from. The love of a daughter and her father ends with the mushroom cloud of the explosion. And with that, Deadpool finally dies.

Even thou Ellie really killed Deadpool and she is only the second person to do it, we can be sure that this is not the last we saw from Merc with the Mouth.