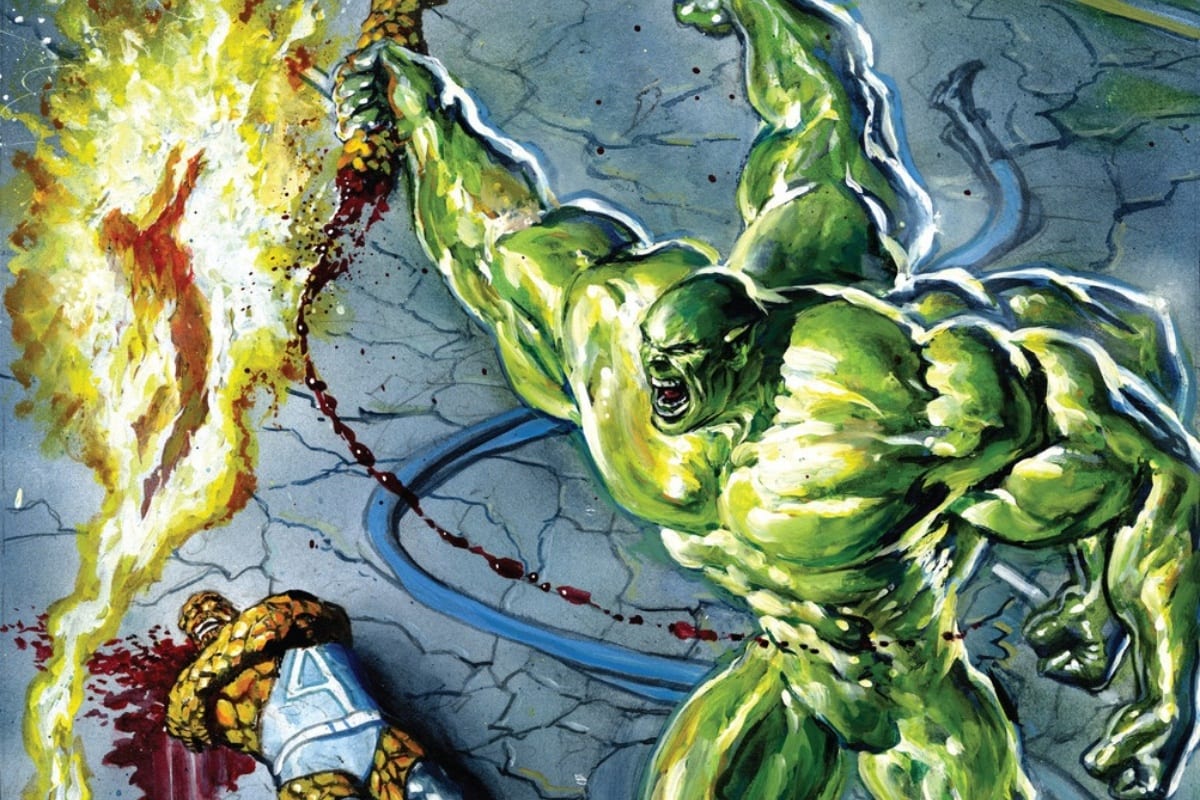 Like DC Comics, Marvel Comics also has a large number of alternative universes (or Earths), where our well-known heroes experience stories and adventures that are different from what they’re used to in their primary universes. This allows the writers to have more creative freedom and to explore some new character concepts and see what might have happened had the dice fallen differently. Today, we are going to talk about one such story featuring the Hulk, so keep reading to find out more.

Who is Space Punisher Hulk?

Space Punisher Hulk is a fictional character from the Marvel Universe and an alternative version of the superhero Hulk from Earth-12091. He was created by Frank Tieri and Mark Texeira in 2012, and had his debut in Space: Punisher #2

. It is considered to be the strongest incarnation of the Hulk ever.

Space Punichser Hulk was created in the same way as the regular Hulk in the primary universe. Namely, physicist Bruce Banner was exposed to large quantities of gamma radiation which enabled him to transform into Hulk, yet while the Earth-616 (Prime Universe) version of the character remained relatively “normal”, the Earth-12091 turned into a proper monstrosity.

The main difference between this version of the Hulk and the Prime Universe one (sans the visuals) is that Space Punisher Hulk is a completely separate entity from Bruce Banner, whose body is literally trapped inside Space Punisher Hulk, which means that Banner’s death doesn’t affect him in any way.

This Hulk was much taller than the Prime Universe version and it has a total of four arms. It also gained exceptional physical powers and was feared throughout the universe. Like on Earth-161, general “Thunderbolt” Ross constantly tries to stop him, but fails.

This version has not yet appeared in any derivative materials and has only appeared in two comic books, both set on Earth-12091.

How strong is Space Punisher Hulk and what are his feats?

Even though he has appeared in just two comic books, Space Punisher Hulk has given us a lot of information on his powers and his homicidal feats. He can generally be described as a destructive killing machine, gaining a reputation for destroying spaceships.

He has fought and murdered the Fantastic Four, ripping out the Thing’s hand and tying up Mr. Fantastic in a knot in the process. He strangled Doc Samson with his ow hair in one of the most iconic and disturbing scenes in this storyline. He attacked the hideout of Barracuda when the Punisher tried to gain information about the Six Fingered Hand. He killed some of the mercenaries hired to kill the Punisher but was enraged by The Leader’s sonic device. Punisher managed to escape before the Hulk could kill him. He also bit through Sabertooth and killed Deadpool by literally tearing his head off with his hand. He also ripped out Bruce Banner from his chest and let him get shot without it affecting him whatsoever. In addition to that, he broke the Leader’s back in combat.

Punisher survived facing Space Punisher Hulk, but it was just a lucky coincidence, actually. Later, he defeated and killed six Watchers singlehandedly, which is amazing.

As for his non-destructive powers, he is virtually invulnerable, seemingly indestructible and invincible, and he can both move faster than light and pass through barriers of existence and reality, which is what he did to kill the Watchers.

This version of the character is considered to be the biggest threat to the universe since Galactus made his presence known.

Who can defeat Space Punisher Hulk?

Since he appeared in only two comic books and has crushed all his opponents in a very brutal manner in both issues, it is very difficult for us to say who could defeat this iteration of the Hulk. He is, like most, certainly not invincible, but there is no known opponent that could defeat him so we can only speculate.

We know for sure that the Fantastic Four, the Watchers, Deadpool, Doc Samson, the Punisher, the Leader and “Thunderbolt” Ross cannot defeat him, but we still haven’t been introduced to a character that could. Certainly, divine entities such as the One Above All or some overpowered (alternative) versions of some characters like King Thanos, Rune King Thor or the version of Deadpool that killed everyone in the Marvel Universe, but these are some obvious answers.

If you’re wondering whether there’s a “normal” character that could defeat Space Punisher Hulk, we cannot help you there simply because this Hulk has – so far – defeated everyone he has fought against and we don’t know enough about Earth-12091 to find a character that could outmatch this monstrosity.

And with this, we conclude our story on Space Punisher Hulk. As you can see, this is a very intriguing incarnation of the character and it presents quite a menace to the reality of Earth-12091. Luckily enough, this is just an alternative timeline so this monstrosity won’t threaten the canon universe.