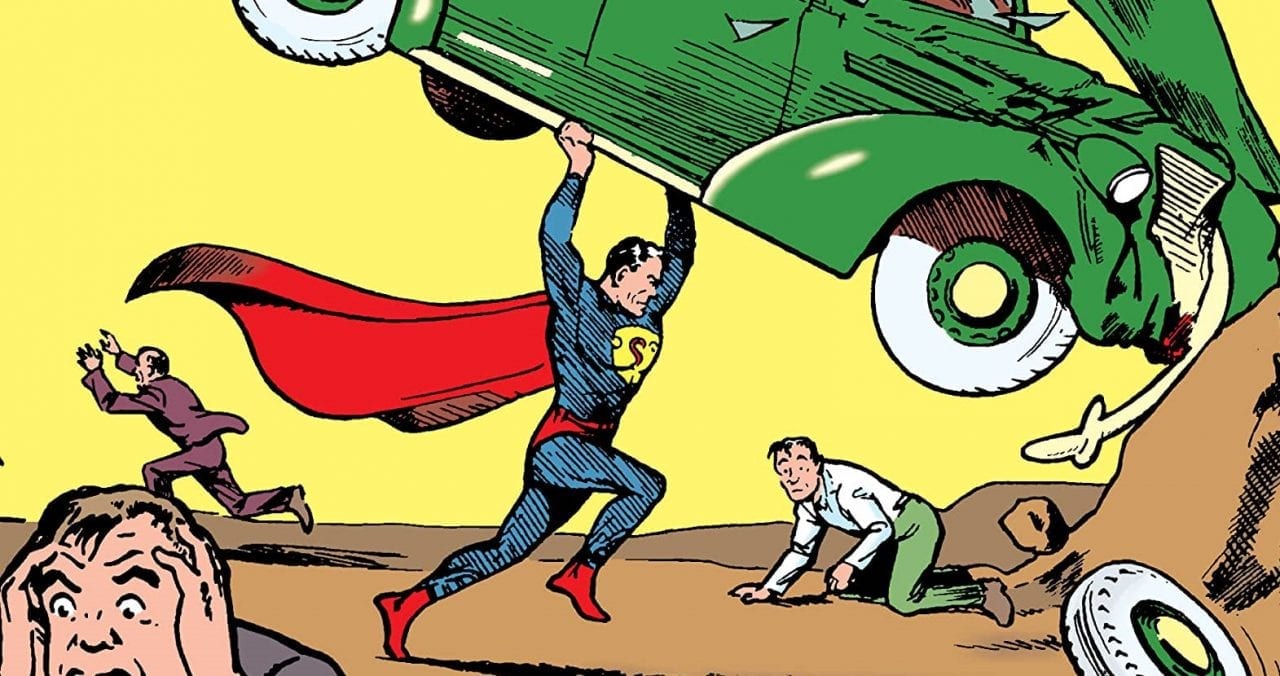 The history of comic books is always an interesting read. Although we know all these characters in their modern versions, most of them have a long history of appearances that is, at the moment of writing this article, slowly nearing a full century. One of those characters is the topic of today’s article and he is the oldest superhero in the DC Comics fictional universe. He is – Superman!

Superman is the first superhero created by DC Comics. He made his debut in Action Comics #1 which came out in May 1938, being cover dated June 1938.

The creation of Superman

The two people responsible for the creation of Superman are Jerry Siegel and Joe Shuster. The two of them met in 1932 while attending the same high school in Cleveland and shared a mutual love for fiction. Siegel wanted to become a writer, while Shuster wanted to become an illustrator.

It told the story of a man named Bill Dunn who is tricked by an evil scientist into consuming an experimental drug. The drug gives Dunn the powers of mind-reading, mind-control, and clairvoyance.

He uses these powers maliciously for profit and amusement, but then the drug wears off, leaving him a powerless human yet again. The first “Superman” was technically a villain, but Siegel and Shuster would work on the idea before actually developing the real Man of Steel.

Soon after this, Siegel and Shuster switched to comics, initially drawing cartoon comics before moving on to actual comic books later on. The original concept of Superman was conceived in 1933, when the initial “villain” Superman was transformed into a crime-fighting superhero with superhuman abilities. The concept developed over time and it wasn’t before 1937 that the final version of Superman was made, but the duo had a lot of problems with finding a publisher for their story. Different publishers kept rejecting them so much, that Siegel thought it was because they were young and unknown, which is when he started searching for another artist to work with him on the Superman project.

When he told his plans to Shuster, the latter was so furious that he burned down their initial comic book, leaving only the cover. The two continued to collaborate, but not on Superman. They eventually reconciled, of course, and further developed the character, “transforming” him into an alien from Krypton that landed on Earth, where he became Clark Kent, a journalist, in order to hide his real identity.

Finally, in 1937, Siegel was asked to produce a few stories for an upcoming anthology comic titled Action Comics. Despite accepting, Siegel and Shuster did not consider Superman, because they were negotiating with another publisher at the time. Finally, when the other publisher rejected Superman, the character was offered for publication in Action Comics and was finally accepted. Siegel and Shuster were glad to have their character accepted for publication, so they quickly agreed, got payed and signed a contract.

Superman finally appeared in Action Comics #1 in May 1938 (cover dated June 1938) in the story titled “Superman”, written and illustrated by Siegel and Shuster. No one knew that Action Comics #1 would mark the beginning of one of the best-known and greatest comic book characters ever.

Superman is today one of the chief characters in the DC Comics universe. Born as Kal-El of Krypton, he was sent to Earth by his parents, moments before the tragic destruction of his home planet.

On Earth, he landed in Kansas, near the estate of ones Jonathan and Martha Kent, two local farmers who took him in and raised him as their own child, giving him the name Clark Kent. Young Clark was thus raised in Smallville, not knowing his heritage and the powers he possesses.

As he grew up, Clark Kent became aware of his powers and found out about his heritage, but he decided to accept the Kents as his real parents, even after discovering his true identity.

Most of these scenes include him discovering the messages left to him by his real father, Jor-El, through which he learns everything about himself and his heritage.

Later on, Clark Kent becomes a reporter for the Daily Planet, a Metropolis-based newspaper, while simultaneously “working” as Superman, the protector of Metropolis and the Earth.

While working for the Daily Planet, Superman meets Jimmy Olsen, a trusted friend and ally, and Lois Lane, a big-shot reporter, with whom he eventually falls in love and starts a relationship. He’s also had an on-and-off relationship with Wonder Woman, but Lois was always his first and true love.

One of Superman’s first opponents was General Zod, another survivor from his home planet, who threatened Earth, before being stopped by Superman.

Unlike some other DC superheroes, Superman has a lot of extra-terrestrial enemies, some of the most notable being Brainiac, the collector of planets, and Doomsday, a Kryptonian monstrosity matching Superman’s own powers.

Still, his archenemy is a human, a very powerful and very intelligent human, but still only a human. His name is Lex Luthor and he plays a very important role in Superman’s crime fighting career.

He is also the leader of the Justice League, an organisation of Earth-based superheroes that protect the planet, but also the galaxy, from different cosmic threats.

Although the Justice League has fought a variety of different enemies, their toughest one was always Darkseid, the tyrannic ruler of the planet Apokolips, who often clashed with the Justice League. Superman was one of the rare characters in the whole DC Universe who could stand his ground against Darkseid.

We’ve told you how Supeman was created and who he is. Now it’s time to tell you all of his powers, since that is what makes a superhero super. Let us see what powers Superman possesses.

In terms of power, Superman is without a doubt one of the strongest characters in the DC Comics universe. Being thrust into Earth’s atmosphere gave him enormous powers and made him the superhuman he is.

Superman has a lot of superhuman traits like strength, speed, durability and others. He can shoot burning lasers from his eyes and ice from his mouth. He can also fly and is generally able to stand his ground in any form of physical confrontation, despite the opponent.

Although he looks like a god from a human perspective, he isn’t one. In fact, on Krypton he would’ve been like any human on Earth, but the Earth’s atmosphere and living conditions enhanced his powers in that environment.

While he might not be the fastest DC Comics character, Superman certainly is among the fastest characters. Superman is extremely fast, that cannot be doubted.

He can fly around the world – both literally and figuratively – in mere seconds and is known to have traveled as far as Pluto in ridiculously little time. And while we don’t have the exact number, we know that Superman is extremely fast.

He is not faster than the Flash, but he is one of the few characters that can pose a challenge for the Flash and force him to give it his best in a race.

He also does extremely well in the durability category. Namely, as we all known, Superman is known as the Man of Steel. And although his body isn’t actually made of steel, he cannot be harmed by humans and the majority of human-made weapons (the only weapon known to have wounded superman is a very large nuclear bomb).

As for his extraterrestrial powers, Superman’s well-known fight against Doomsday has proven just how long he can last and his encounters with Darkseid have shown that he can even survive (although not without suffering much pain) being hit by an Omega Beam, which is generally considered to be lethal for almost everyone.

This is extraordinary, really, as both Doomsday and Darkseid are among the most powerful beings in the DC Comics universe. Superman also has a regenerative factor that renders him practically immortal, which is also very important for his character.

But, Superman – although powerful – is not flawless like some comic book superheroes. He has two very distinct weaknesses that can significantly reduce his powers and turn him into a “normal” human being. Superman’s first major weakness is Kryptonite.

Not only does Kryptonite reduce Superman’s powers and cause him much pain, but it can also potentially even kill him if there’s enough of it. His second weakness is his dependence on the Earth’s environment and it’s Sun, without which he would (1) not have the powers he has, and (2) not be able to last very long in a fight, because he would lose his energy.

And that is the story of Superman, DC Comics’ first superhero. Although Batman debuted a year later, the Man of Steel still holds first place in the historical development of DC Comics’s superhero pantheon.