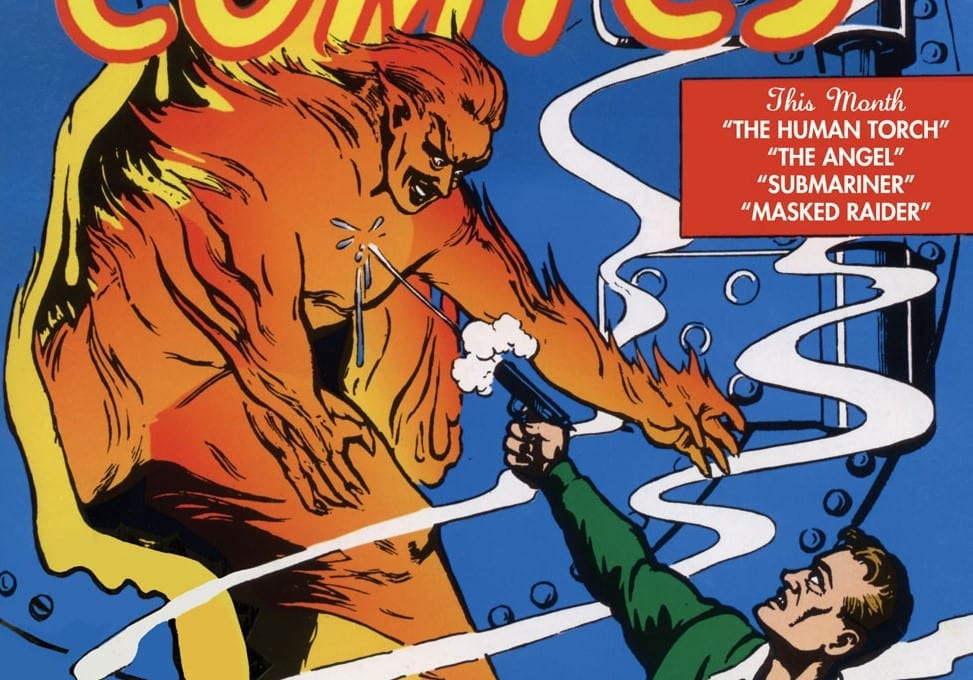 The history of comic books is always an interesting read. Although we know all these characters in their modern versions, most of them have a long history of appearances that is, at the moment of writing this article, slowly nearing a full century. One of those characters is the topic of today’s article and he is the oldest superhero in the Marvel Comics fictional universe. Who is he? Well, keep reading to find out.

Marvel Comics introduced a total of three superheroes in its first issue back in 1939 – they are Human Torch, Angel, and Namor the Sub-Mariner, but since Human Torch appeared first, we can consider him to be the first ever Marvel Comics superhero.

Along with its chief rival, DC Comics, Marvel Comics is the biggest and most important mainstream comic book publisher in the United States. Marvel has, along with DC Comics, contributed to the development of American comics, specializing in the superhero genre.

Stan Lee, Steve Ditko and Jack Kirby are just some of the pivotal writers who’ve helped shape the style and universes of Marvel Comics.

In 1939, pulp-magazine published Martin Goodman decided to expand to he emerging comic book market. Timely Comics soon provided him with series of comic book stories that Goodman finally decided to publish under the name Marvel Comics #1

(October 1939), which became the first comic book published by Timely Comics, the predecessor of Marvel Comics.

Marvel Comics #1 was a pivotal issue but it also caused confusion related to the topic of today’s article. Namely, when we compare the situation with DC Comics, whose first superhero was Superman (Action Comics #1, 1938), Marvel’s situation is a bit more complicated. Namely, Marvel Comics #1 introduced not one – but three different superheroes at the same time.

The issue had a total of seven stories, three of which were about superheroes. The first one was “The Human Torch” which introduced Jim Hammond, a.k.a. Human Torch to the continuity.

“The Angel” introduced Thomas Holloway, also known as Angel, while the third story, “The Sub-Mariner”, introduced Namor McKenzie to the narrative continuity.

Thus, all three could be considered as Marvel’s first superheroes, but since the editors decided to start the issue with the story “The Human Torch”, we are going to consider Jim Hammond to be the first ever Marvel superhero.

We’re now going to introduce the character to you.

Who is Human Torch?

Human Torch is a fictional superhero appearing in stories published by Marvel Comics. He is Marvel’s first superhero, debuting in the first story of the now classic comic book Marvel Comics #1 (1939. Human Torch was created by artist Carl Burgos, who also wrote his original story.

Human Torch is the superhero name of Jim Hammond (originally Hamond), an android created by Professor Phineas Horton. He was initially viewed as a scientific monstrosity, as he was able to surround himself in flames and control them, but he soon adapted the human moral code and became a superhero. Jim Hammond operates as an offices with the New York City Police Department (NYPD).

Aside from being the first superhero, he is also responsible for the “discovery” of Namor, whom he fought during their first encounter. Human Torch is a character that is closely associated with the Golden Age of Comic Books and was almost completely forgotten after the ’50s. He was gradually revitalised during the ’70s and is now a regular, albeit supporting character in the present-day Marvel Universe.

Human Torch has appeared in animated form in television series and in video games, and also has a cameo appearance in the form of an exhibit in the movie Captain America: The First Avenger

. He is not to be confused with a more famous character of the same name, the Human Torch who is a member of the Fantastic Four and whose real name is Johnny Storm. The two of them, despite the identical superhero name, are completely unrelated characters.

Before we wrap up our history lesson, we are going to tell you a bit about Jim Hammond’s powers and abilities as they have been depicted in the comic books.

Despite being a superhero, Human Torch is relatively normal when compared to a lot of other superhero characters. He does not have superstrength (he is as strong as a normal, fit male in his 20s), but he is an android which makes him more durable than a regular human.

His most important an obvious superpower is pyrokinesis, the ability to control fire, including surrounding himself in flames. This form is called a Plasma Form and it can be complete (whole body) or partial (certain parts of his body). A stronger Plasma Form is known as Nova Flame; in such a state, Human Torch surrounds himself with such strong fire that he can reach the temperature of a 1,000,000°F. He can also fly.

He can manipulate other flames he encounters and is immune to any fire-based attack, which actually makes sense when you think of it. He can also generate radiation and has the ability of thermokinesis, the ability to mentally control the ambient heat energy within his immediate environment, even when he himself is not aflame.

Beside the obvious contact with water or anything that can extinguish a fire, Jim Hammond’s biggest weakness is the fact that he cannot hold his plasma state for more than 16.8 hours, which is a very significant form of energy depletion. More than 16 hours is not little, but it would be quite awkward if he’d turn back into his regular android form during a tough and important battle, right?

And this is the story of Jim Hammond, a.k.a. Human Torch, Marvel Comics’ first ever superhero.