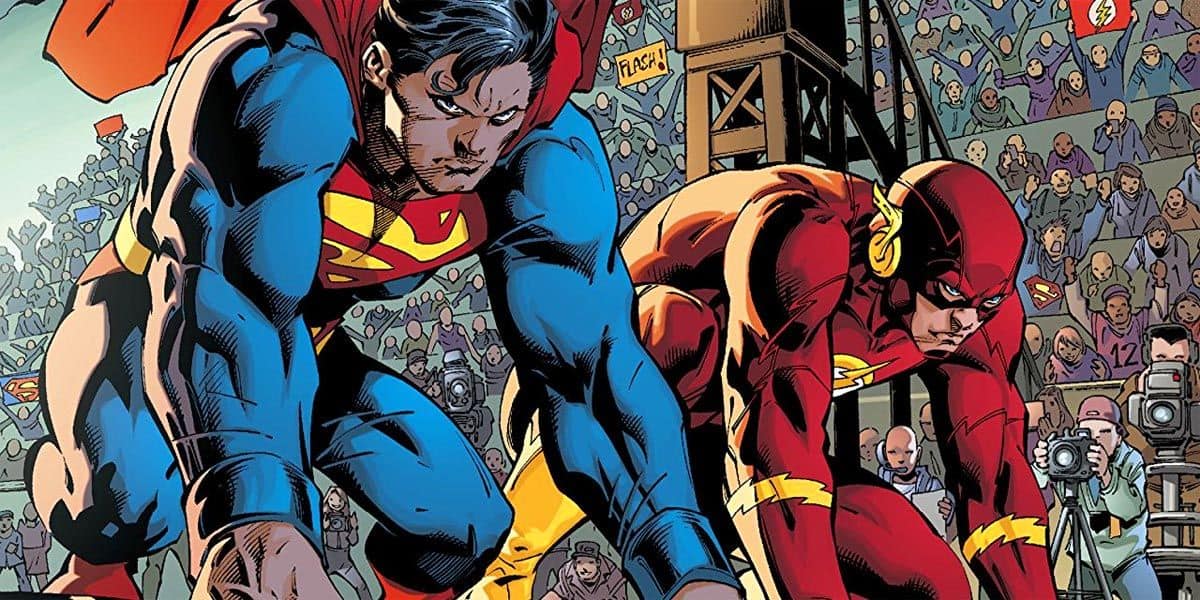 Ever wondered who the fastest man alive is? Your local advertising office will most certainly say The Flash (it’s a brand thing, trust us), but your neighbour from down the hall might say it’s Superman. Both are certainly fast, but who’s faster? Today’s article will examine that question.

To give you a quick answer – based on everything we know from the comics, The Flash is indeed faster than Superman, although derivative materials don’t always follow this comic book fact.

Superman is one of the chief characters in the DC Comics universe. Born as Kal-El of Krypton, he was sent to Earth by his parents, moments before the tragic destruction of his home planet. On Earth, he landed in Kansas, near the estate of ones Jonathan and Martha Kent, two local farmers who took him in and raised him as their own child, giving him the name Clark Kent. Young Clark was thus raised in Smallville, not knowing his heritage and the powers he possesses.

As he grew up, Clark Kent became aware of his powers and found out about his heritage, but he decided to accept the Kents as his real parents, even after discovering his true identity. Most of these scenes include him discovering the messages left to him by his real father, Jor-El, through which he learns everything about himself and his heritage.

Later on, Clark Kent becomes a reporter for the Daily Planet, a Metropolis-based newspaper, while simultaneously “working” as Superman, the protector of Metropolis and the Earth. While working for the Daily Planet, Superman meets Jimmy Olsen, a trusted friend and ally, and Lois Lane, a big-shot reporter, with whom he eventually falls in love and starts a relationship. He’s also had an on-and-off relationship with Wonder Woman, but Lois was always his first and true love.

One of Superman’s first opponents was General Zod, another survivor from his home planet, who threatened Earth, before being stopped by Superman. Unlike some other DC superheroes, Superman has a lot of extra-terrestrial enemies, some of the most notable being Brainiac, the collector of planets, and Doomsday, a Kryptonian monstrosity matching Superman’s own powers. Still, his archenemy is a human, a very powerful and very intelligent human, but still only a human. His name is Lex Luthor and he plays a very important role in Superman’s crime fighting career.

Who is The Flash?

Explaining Flash is not as easy as Superman, because – unlike Superman – several characters in the history of DC Comics have worn The Flash costume since the character first appeared back in 1940. The character was created by Gardner Fox and Harry Lampert and was the first Speedster (the collective name for characters who can use the power of the speed force) in what was to become a whole “family” of similar characters. Most of them are superheroes, but some (like Reverse Flash) have been villains.

The first Flash was Jay Garrick, a Golden Age character that introduced the Flash to the DC continuity. He became the Flash after a freakish laboratory experiment and decided to use his new skills to fight crime; at the time, he was a college student. Garrick was Flash initially from 1940 to 1951, then again from 1961 to 2011 and has been a part of the main continuity since 2017, although now very old. Due to the nature of the speed force and its role in balancing out the whole DC Multiverse, his appearances and his role in the main continuity has changed a lot over the years.

The second and undoubtedly the most famous Flash is Barry Allen, the current “main” Flash and the rival of Eobard Thawne, the Reverse Flash. Barry Allen donned the mantle from 1956 do 1985 and has been doing it since his “rebirth” in 2008. He is a forensic scientist who got his powers after lightning struck his laboratory and the chemicals inside. A very important part of his story is the murder of his mother by Thawne, for which is father was blamed; this is why Allen constantly tries not only to find out the truth, but also change the past, which would ultimately result in the creation of the Flashpoint universe. He played a major role in most of DC’s universe-wide crossover events.

Barry’s nephew, Wally West, took over the mantle in 1986 and wore it until 2011; he reappeared and has been donning it again since 2016. Wally West took over the mantle of the Flash after Barry Allen died in Crisis on Infinite Earths, after being the original Kid Flash. He got his powers the same way as his uncle (he is related to Barry’s wife, Iris West) and became his sidekick until he actually replaced him as the Flash. He has been a fan-favourite and is to date the fastest Flash among the group.

The fourth and to date last person to don the Flash costume is Bart Allen, Barry Allen’s grandson, who was the Flash from 2006 to 2007. He appeared as the superhero Impulse, only to inherit the Kid Flash uniform from Wally West, before ultimately becoming The Flash. He is actually from the 30th century and spent most of his career as the sidekick to Wally West, becoming Flash after his death in the Final Crisis event in 2006. His tenure was brief, as Barry Allen soon returned and reclaimed his mantle.

So, this is the story of the superhero Flash. He has been described as the fastest man alive, but as we can see – it is not just one man, it is actually four of them and they all played important roles in (re)shaping the DC Multiverse at one point or another.

Who is faster – Superman or the Flash?

Both Superman and Flash are known for their speed. And while the Man of Steel has a lot of other qualities, speed is The Flash’s primary skill and power. Superman can be fast, but can he be fast enough to cope with the fastest man alive? Let us see.

A Brief History of the Rivalry

Whether you may believe it or not, the debate on whether Superman is faster than The Flash is pretty old. The two superheroes raced each other on several occasions, sometimes for the sport of it, sometimes because of an important reason, but whatever the reason might have been – it was always an interesting thing to see.

Their first race happened way back in 1967, when Barry Allen organised a charity race around the world against Superman, at the behest of the United Nations. It was a truly epochal event as shown in the story “Superman’s Race With the Flash!”, published in Superman #199. Despite all the excitement, the race ended as a tie, as both Superman and The Flash arrived at the finish line at the same moment. That same year, Barry and Clark again raced, this time throughout the whole Milky Way Galaxy. This time, the stakes were higher because two aliens (which later turned out to be two disguised villains) threatened to destroy Central City (Flash’s hometown) and Metropolis (Superman’s hometown) in case they refused, while also holding the rest of the Justice League hostage. Published in Flash #175, the story “The Race to the End of the Universe!” once again ended in a tie, despite the fact that Batman declared Superman the winner, while the rest of the Justice League saw Barry crossing the finish line first.

The two superheroes raced against each other seven more times, with Superman taking on every Flash except Bart Allen. Some of the races were important, some were just for fun and some weren’t even races, but the two of them did test each other’s speed. Before we give you a list in table form, we can briefly state that out of the seven remaining races, Superman has won only once, along with one tie, meaning that the three Flashes won the five remaining races. Now let us see all of them:

So, as you can see for yourselves – in almost every iteration of the famous rivalry, Flash was more successful. This is additionally confirmed by the recent The Flash #49

, where Barry Allen and Wally West are engaged in a chase that could potentially destroy the planet. Being the only character capable of challenging them, Superman tries to follow them to see what’s going on, but ultimately has to stop – exhausted – stating that they were just too fast for him.

As far as the Flashes go, the fastest among them is Wally West. Barry Allen comes second, with Bart Allen in third spot. Jay Garrick is the slowest among the four, but even he was quick enough to beat Superman in a race.

Based on what the comic books have taught us, The Flash is certainly faster than Superman. It is not much, as it was stated on multiple occasions that Superman is practically the only non-Speedster that can challenge the Speedsters, but as far as the comics go – it’s just not enough.

The issue here is that DC Comics never outright confirmed this, meaning that even though the comics cheer for The Flash, the publisher just doesn’t want to definitely solve the mystery, which is good when marketing is concerned, so we can understand the logic behind that reasoning. Plus, a lot of derivative materials actually support the thesis that Superman is faster, despite the comics not providing any solid proof for that thesis.

An interesting thing, though, is that even some Speedsters remarked that Superman could beat them. Namely, generally speaking – Superman is slower, but even Wally West – who is the fastest Flash and has beat Superman in a race – has stated that given enough motivation, Superman could get a big enough boost to gain extra speed and become faster than any of the Speedsters. Luckily enough for them, this has not happened so until it does, we can safely assume that the Flashes are faster than Superman.