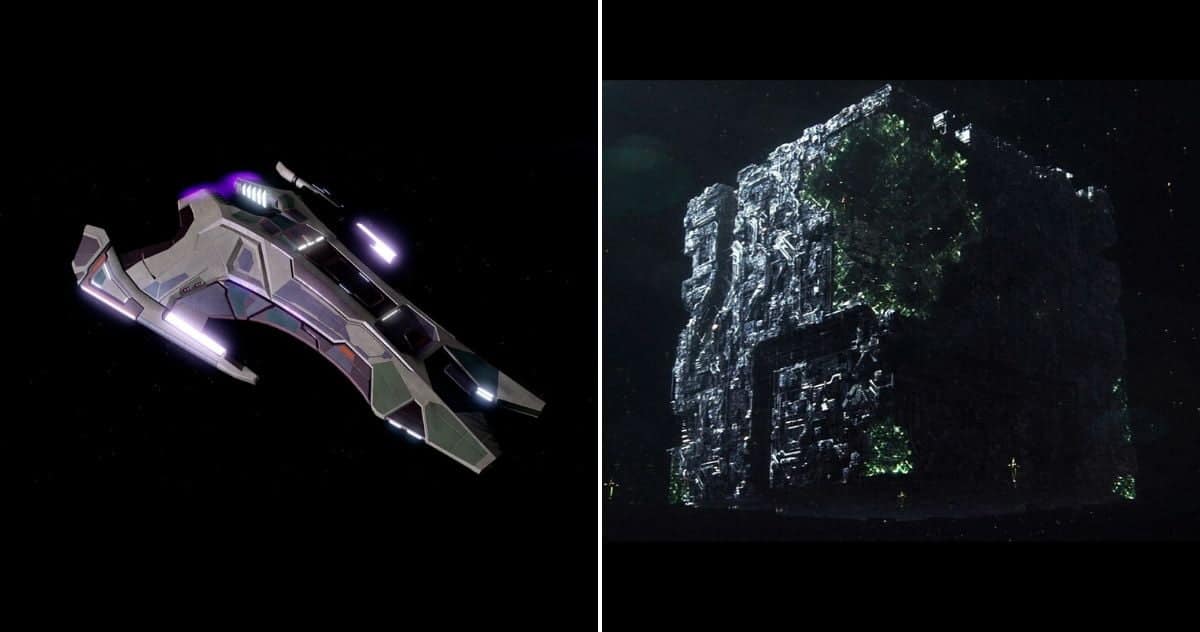 The Dominion and the Borg are some of the strongest species in the whole Star Trek universe, so it is no wonder many people are wondering, who would win if those two species come head to head.

The Borg is a much stronger species than the Dominion, and would easily win this fight.

Unfortunately, we have never seen the Dominion and the Borg clash on TV so we can only guess who of them is stronger. But we have some strong arguments for our guess, and you can find them below.

In the Star Trek universe, the Dominion is an interstellar state and military superpower from the Gamma Quadrant, made of hundreds of dominated alien species.

It is led by Changelings/The Founders, a race of shapeshifters responsible for both the creation of the Dominion and all strategic decisions made throughout its history.

The Dominion is administered by the Vorta, clones specifically genetically engineered by the Founders to act as field commanders, administrators, scientists, and diplomats.

The Jem’Hadar, also engineered by the Founders, are the military arm of the Dominion and one of the most powerful military forces in the galaxy during the Dominion’s height.

The Dominion first appeared in season 2, episode 26 “The Jem’Hadar” of the TV series Star Trek: Deep Space Nine and unsuccessfully waged war on the United Federation of Planets after silently annexing Cardassia in the Alpha Quadrant.

The Borg is a fictional alien species, often appearing as antagonists in Star Trek. The Borg is a group of races transformed into cybernetic organisms, which function as cranks within a group consciousness called the “Collective” or “Hive”.

The Borg is driven by the need for ‘perfection’, which they supposedly achieve by assimilating other species and adding their technologies and knowledge to the Collective.

Assimilation is the process by which the Borg integrates race, culture, knowledge, and technology into its Collective. “You will be assimilated” is one of just a few phrases that Borg uses in communicating with other species. The Borg met and assimilated thousands of species and trillions of individuals throughout the galaxy. The Borg assigns a number to each species during the first contact with it.

In addition to repeated appearances in the TV series Star Trek: The New Generation, they are portrayed as a major threat in the movie Star Trek 8: First Contact. They also played a major role during Star Trek: Voyager and their technology provide the USS Voyager a path to the Alpha Quadrant.

The Borg has become a cultural symbol for an invincible force against which “resistance is in vain.” TV Guide

Why is the Borg stronger than The Dominion?

Both of these strong races were defeated by the Federation, and that probably happened because the Federation proved that flexibility, creativity, and determination can conquer all.

I think this is important to mention because probably neither of these species would have the upper hand in that part. So, they mostly rely on their strength, their numbers, and their firepower. And this is where the Borg easily wins.

If you have been following Star Trek, then you probably know that the Borg wanted to assimilate Species 8472. That turned out to be a very bad choice for them because Species 8472 was the only, and I mush emphasize ONLY, species to ever beat the Borg (I don’t count the Federation).

How did the Species 8472 win against the Borg? Well first, they are immune to assimilation, and second, which is more important for this discussion, they had extremely powerful weapons.

They used only 9 ships to destroy the whole Borg planet! Just for comparison to show how weaker The Dominion is then Species 8472.

At the end of DS9, we see the Dominion fleet bombarding a planet from orbit which causes a great deal of destruction to the planet surface. Dominion fleet of probably more than 900 ships did much less damage than just 9 Species 8472 ships, making them about 1,000 to 10,000 times weaker than a species that was very effective at fighting the Borg.

This just shows that there is almost no chance that the Dominion could stop the Borg. They just don’t have that firepower.

On the other hand, nor did the Federation have, but they did manage to defend themself. And here we come to the part from the start of this discussion.

Unfortunately for the Dominion, they don’t have flexibility, cunningness, adaptability, and other traits that the Federation of Planets has.

The only reason they could fight the Federation was because of their numbers and their fast technology building. They could fast clone Jem’hadar soldiers and build ships much faster than the Federation. Also, they didn’t care about their soldiers like the Federation, and that was an advantage in some parts.

But, on the other hand, their numbers, and fast shipbuilding, are nothing to the size and number of the Borg. Borg has billions of drones and has assimilated half of the Delta quadrant. The Dominion is nothing in comparison.

Conclusion – Who Is Stronger, The Dominion or The Borg

As you can see from above, The Borg would easily win against The Dominion. They have numbers, they have strength, they have the technology, all things on their side.

They had all of that against the Federation as well, and couldn’t assimilate it, but The Dominion doesn’t have what the Federation has, and that is adaptability, flexibility, determination, and more that makes them what they are.

Easy win for the Borg.