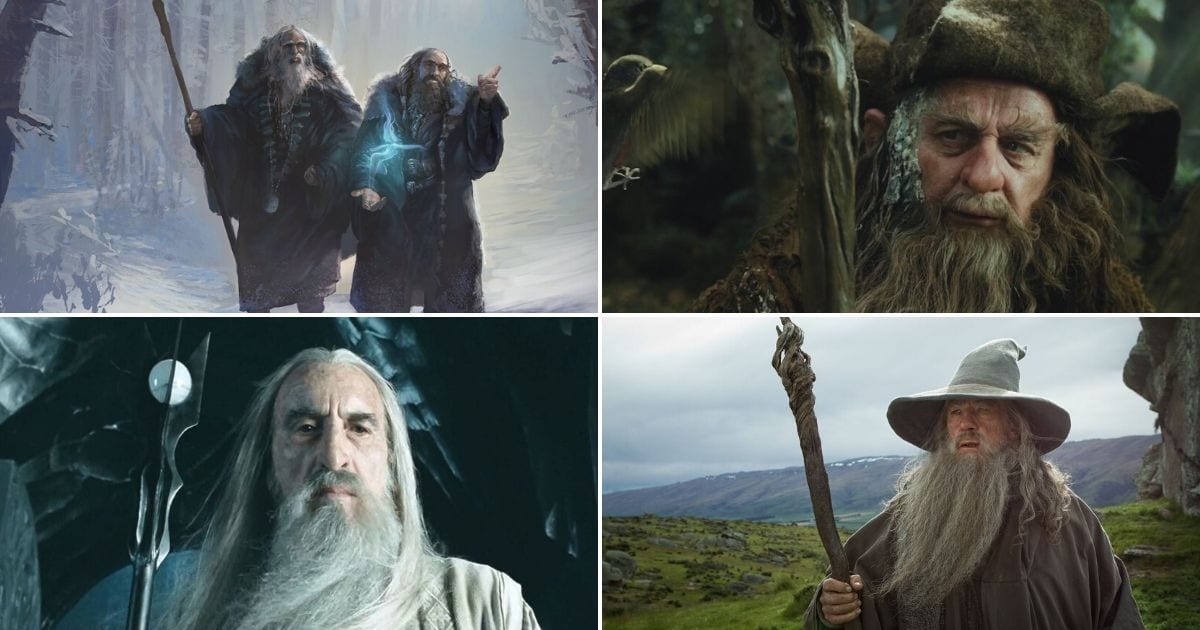 Some of the most important, fun and mystical beings in fantasy worlds are wizards, and Lord of the Rings world or better to say Middle Earth world is no different.

In Lord of the Rings world, there is an order of Wizards that came to Middle Earth, and five of them came to northern regions, those 5 wizards are Saruman, Gandalf, Radagast, Alatar, and Pallando. We will explain every one of those wizards in detail.

Istari are fictional characters from J. R. R. Tolkien’s fantastic trilogy “The Lord of the Rings.” They are the wizards who came from Valinor to prevent Sauron from his evil plans to subdue Middle-earth.

Alatar and Pallando the Blue

As soon as they arrive, Alatar and Pallando (a Maia of Oromë) head east. The peoples of Middle-earth called them Ithryn Luin or “Blue Wizards” because their uniforms were navy blue. They went to the farthest parts of the Middle-earth, far to the east and south beyond númenór influence, as messengers to hostile lands. It is not exactly known what happened to them, they probably failed, but certainly not in Saruman’s way. They are said to have founded secret sorcerer sects and cults of magical traditions that survived long centuries after Sauron’s downfall.

Radagast the Brown (Aiwendil, a Maia of Yavanna) also failed in his mission. It is widely believed that his failure is not as severe as that of Saruman or that of the Blue Wizards. Radagast, the fourth Istari, fell in love with the beasts and birds of Middle Earth and forgot the elves and the humans. He resided in Rhozgobel, in the southern part of Mirkwood, and spent his days caring for wild, forest creatures. He certainly never became evil even though his birds brought information to Saruman the White as the supreme wizard of their order, which he used for treason. The eternal accuracy and intelligence of the Gwaihir Eagles was probably the merit of Radagast. It is not known what happened to Radagast after the end of the Third Age, but it is assumed that he was allowed to return to Valinor after the War of the Ring.

Saruman the White (originally Curumo, a Maia of the people of Aulë the Maker) was the chief of the five Istars sent from Valinor to help the free peoples of the Middle Earth oppose the evil that remained after Morgoth. He was from the Maiars and was particularly interested in the Ring. Over time, this obsession distorted his actions and he betrayed the White Council and partnered with Sauron. He resided in the former city/fort of Gondor, Isengard, where he captures Gandalf. Gwaihir lord of eagles in Middle Earth rescues Gandalf. Saruman raised an army of mighty Uruk-hai stronger than ordinary orcs so they could walk in daylight. He attacks Rohan and loses in the battle in Helm’s Deep, He retired to Isengard where he was captured by the Ents under the leadership of the Treebeard. After some time he was released because he lost his powers. To get revenge on the hobbits who participated in the War of the Ring he did many bad things in the Shire by the power of his malice, until the fellowship came back and defeated him. He dies in the Shire at the hands of a longtime helper Gríma Wormtongue.

Gandalf (Olórin, a Maia of Manwë and Varda) is a character from J. R. R. Tolkien’s fantasy novels and their imaginary mythology. He appears in The Hobbit, The Lord of the Rings, and Unfinished Tales of Númenor and Middle-earth, as well as movies and games.

Gandalf was one of the older wizards who was sent to Middle Earth to resist Sauron. During his two thousand years in Middle Earth, Gandalf began to understand the way these inhabitants lived, especially The Hobbit. Gandalf was constantly working on plans to counter Sauron himself, and he himself launched a chain of events that eventually resulted in the fall of the Lord of Darkness.

Gandalf was one of the Maiars, incarnations at the service of the Valars. When he lived in the Undying Land he was known by the name of Olórin and was among the wisest of Maiare. He used to know how to walk among the Elves, unnoticed or as one of them and shared the acquired wisdom with one another. He spent most of his time in Lothlórien – the gardens by which the Lothlórien Forest in Middle Earth was named. Olórin also frequently visited Nienna at her home in the far west. It was said that Olórin learned from her compassion and patience. However, the name Olórin was most associated with Valar Manwe and Ward – they were the ones who sent Olórin to Middle Earth around 1000 AD.

The Maiars who were sent from Valar to Middle Earth were given the form of elderly people and were known as the Istars, that is, the Wizards. Their task was to assist the inhabitants of Middle Earth in the battle against Sauron, but without seeking power and domination for themselves. Olórin was the last of the five wizards to arrive at the Gray Ports in the northwest of Middle-earth. There, Círdan handed him Narya, one of the Three Elven Rings, explaining that difficult temptations were awaiting him and that the Ring would help him in his endeavors. Namely, Narya had the power to light a fire in the hearts of people in difficult times.