Two years ago, in 2020, Chris Hemsworth landed on Netflix with Extraction. The film directed by Sam Hargrave became a huge success and for a time it was the most watched Netflix original film on the platform. The movie, while simple, has all the elements of a classic action film, and the execution from Hargrave and his team of filmmakers was almost flawless. The movie was so successful that, of course, it was transformed into a franchise, with the second film expecting release sometime soon.

Now that Hemsworth has his own action franchise on Netflix, it is the turn of Elsa Pataky, Hemsworth’s wife, to try it out in the same field. Pataky comes with Interceptor, a funny title, as it feels very much in line with Extraction. However, Pataky’s effort feels very much the opposite in terms of quality. Interceptor is one of those movies that really shows the way it is cutting corners and serves as an example of why action films are so hard to make.

Interceptor is a film directed by Matthew Reilly and stars Elsa Pataky, Luke Bracey, Aaron Glenane, and Mayen Mehta. The film tells the story of Captain JJ Collins, who after a sexual harassment scandal is put into her old position at an interception station. Unfortunately, Collins sees herself trapped in a global crisis after a group of terrorists captures 16 nuclear missiles and plans to launch them against USA cities. Only Collins stands between the terrorist and the catastrophe.

Interceptor is clearly a low-budget film. None of the actors, the concept, or the team behind it are really on the level that Netflix would spend a huge amount of money on the film. Sadly, this lack of resources hurts the movie a lot because it creates this enormous amount of constraints that just doesn’t really feel like the proper environment to create a sort of movie like this. Interceptor wants to be Die Hard, but it doesn’t have the space to do it, literally.

The movie basically spends its time going around two rooms, and that is it for the number of sets that the team was able to create. When the movie starts, the premise feels very much in line with Metal Gear Solid 2. However, that game was able to create a whole scenario where the protagonist could walk around this huge sea station; Interceptor doesn’t have the means to offer that and traps its protagonist inside a room for most of the 90 minutes of running time.

RELATED: Is Chris Hemsworth in Netflix’s Interceptor? (& Who Is He Playing?)

Director Matthew Reilly does the best he can with what he has available, but for a movie that sells itself as an action film the movie really lacks action sequences for most of its running time. There is one at the beginning, one in the middle, and then the ending section of the third act. None of these sequences are particularly well shot, and the action choreography feels slow and uncreative. The action in the movie is basically every single action scene put on screen for the last 30 decades.

We know that it is hard to create a vision when you don’t have the resources, but the movie feels more like one of those direct-to-video films of the 90s than anything else. Netflix should really learn that they need to offer better quality content if you want to create a strong brand and keep your subscribers around for more quality stuff. There are definitely better action movies around, and this one doesn’t really meet the bar that has been made the standard after movies like The Raid and John Wick.

When it comes to acting, Pataky doesn’t really come forward as a very excellent performer, but she holds her own throughout the film. She does well when it comes to selling feelings, such as pain, anger, and frustration, but Pataky doesn’t really have what it takes to sell the action sequences. Her choreography feels mostly slow, and not on point. In this type of film, the action choreography needs to be precise in order to sell the impact of the action, but there is nothing like that here.

Michael Lira, who composes the music for the film, might be the strongest element in the film. The score really pumps you up, and elevates many scenes to another level. The music has this strange feeling as it comes from three or four decades ago, but it feels completely purposeful. Unlike the visuals, it feels like it could be part of a greater film than this and still feel like it could be a quality release.

The movie is also full of a ton of social commentary. Feminist commentary, to be more precise, but it doesn’t really do anything with it other than spit it out. It feels like an outdated way of tackling the topic, and it definitely feels like it could have been handled a lot better.

Interceptor doesn’t really do anything really bad, but it doesn’t really reach the standard that many of today’s action films need to reach to be competitive. This feels exactly like the type of movie that Netflix should avoid making from now on, and instead focus its time and money on fewer but more rewarding films and TV shows. 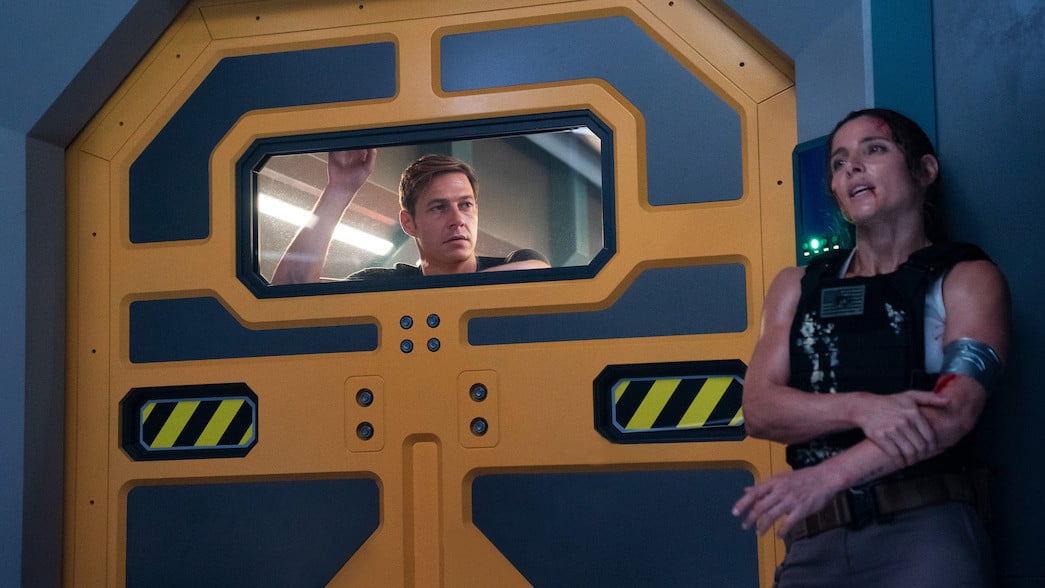