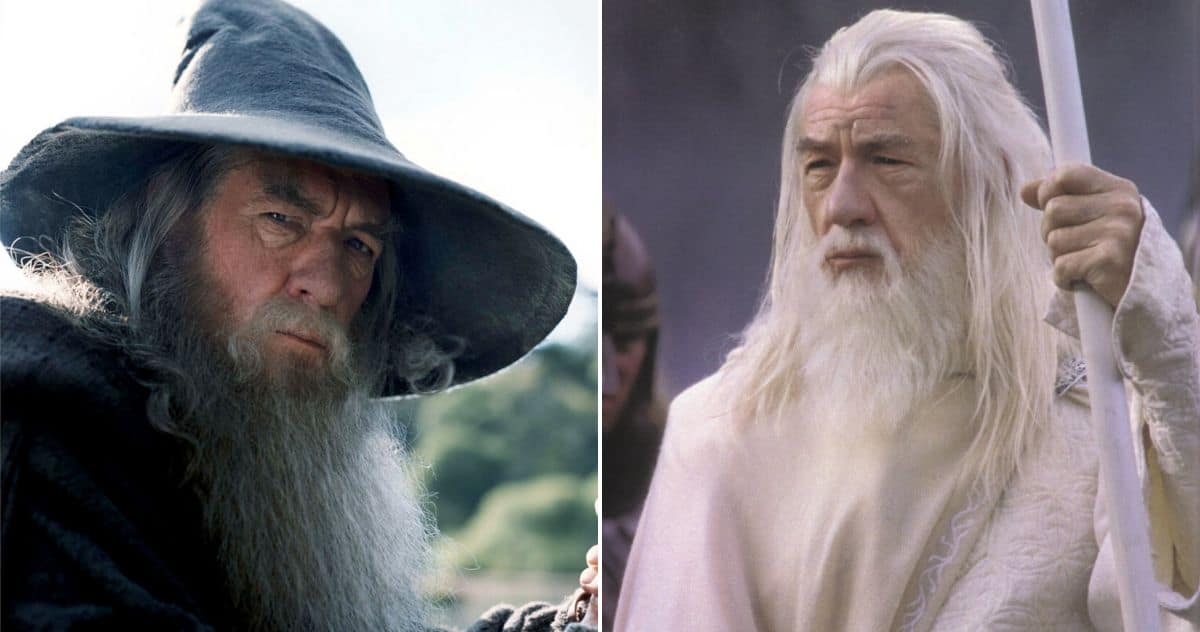 Even thou they are the same person, one would maybe wonder why are they then called differently, who is stronger, and what are the differences between Gandalf the White and Gandalf the Grey.

In this article, we are bringing you everything you need to know about those two different personas of the same person. And for one to exist, another one has to die.

Gandalf the Gray is a wizard, one of the five Istari (Maiar ) mentioned in the Lord of the Rings, who came to Middle-earth from the Far West to unite races in the fight against Sauron. Namely, in order not to make the same mistake with the elves, they sent the Istari by reducing their powers and giving them the bodies of the old men. In this form, others should have been taught from their wisdom, not followed by fear.

They have entered the shores of the mortal lands, in about the thousandth year of the Third Age of the Sun. Cirdan the shipbuilder, who greeted the Istari, noticed that Gandalf was the most prominent of them in spirit, and gave him a ring of fire called Narya with the words: Take this ring, Master, for your labors will be heavy, but it will support you in the weariness that you have taken upon yourself. For this is the Ring of Fire, and with it, you may rekindle hearts in a world that grows chill. But as for me, my heart is with the Sea, and I will dwell by the grey shores until the last ship sails. I will await for you.

Numerous were his names: from Olórin in Aman, Mithrandir and the Gray Pilgrim (as the elves called him) to the Gandalf the Wandering Wizard, who knew all the roads until they finally call him Gandalf the Grey.

Gandalf the Gray plays an important role in Tolkien’s novel The Lord of the Rings from the beginning. It appears from part one, The Fellowship of the Ring when he arrives in his carriage to Frodo’s uncle Bilbo on his 111th birthday. A few days later, he discovers that Bilbo owns the Ring of Power, the evil ring of the dark lord Sauron. He then sends Frodo to a village called Bree and heads towards Isengard to get advice from the highest Istari Saruman. There Saruman reveals his true intentions, urging Gandalf to help him obtain the Ring for his own use. Gandalf refuses, and Saruman imprisons him at the top of his tower. Eventually, Gandalf is rescued by Gwaihir the Eagle.

Gandalf wonders all over Middle-Earth and persuades its fellowship to help him stop Sauron from his evil intentions. The fellowship of the ring included members Gandalf, Frodo, Sam, Aragorn, Legolas, Gimli, Pippin, Merry, and Boromir. Not all of them were destined to survive the journey. Not even Gandalf the Grey.

Taking charge of the Fellowship (comprising nine representatives of the free peoples of Middle-earth, “set against the Nine Riders”), Gandalf and Aragorn lead the Hobbits and their companions south. After an unsuccessful attempt to cross Mount Caradhras in winter due to harsh conditions, they cross under the mountains through the Mines of Moria, though only Gimli the Dwarf is enthusiastic about that route. In Moria, they discover that the dwarf colony established there earlier has been overrun and annihilated by orcs. The Fellowship fights with the orcs and trolls of Moria and escape them.

At the Bridge of Khazad-dûm, they encounter “Durin’s Bane”, a fearsome Balrog from ancient times. Gandalf faces the Balrog to enable others to escape. After a brief exchange of blows, Gandalf breaks the bridge beneath the Balrog with his staff and tells the famous words: “You cannot pass! I am a servant of the Secret Fire, wielder of the Flame of Anor. The dark fire will not avail you, Flame of Udun! Go back to the shadow. You shall not pass!” As the Balrog falls, it wraps its whip around Gandalf’s legs, dragging him over the edge. Gandalf falls into the abyss, crying “Fly, you fools!” in the process.

After a long fall, Gandalf and the Balrog crashed into a deep subterranean lake in Moria’s underworld. Gandalf pursued the Balrog through the tunnels for eight days until they climbed to the peak of Zirakzigil. Here they fought for two days and nights. In the end, the Balrog was defeated and cast down onto the mountainside. Gandalf himself died shortly afterward, and his body lay on the peak while his spirit traveled “out of thought and time,” thus confirming its complete sacrifice for the salvation of the Middle Earth. That’s why he was brought back to the world of the living as Gandalf the White to complete his mission…

In the second part, The Two Towers, the story continues in parallel in two books, and in the first, it tells us the story about remaining members of the Fellowship who assist the country of Rohan in the war against traitor Saruman, a former leader of the Order of the Wizard, who wants the Ring for himself. At the beginning of the first book, the Fellowship is scattered, Merry and Pippin are captured by Sauron’s and Saruman’s orcs, Boromir is mortally wounded defending them, and Aragorn, Gimli and Legolas chase after them. The three meet Gandalf, who returned to Middle Earth as Gandalf the White. They learn that he defeated Balrog and even though he himself was killed then, he was sent back and reborn as an important character.

He says he is the same person, with his previous memories, but draws the distinction that he has changed greatly from the wizard the Fellowship once knew.

Gandalf the White was and wasn’t the same person as before, he is the same Maia spirit, but without the doubts and instabilities that clouded his mind in the past when he was Gandalf the Grey. His limitations as one of the Istari have been lifted (maybe not completely) and he is now a greater version of Gandalf the Grey. As he puts it:

‘Yes, I am white now,’ said Gandalf. ‘Indeed I am Saruman, one might almost say, Saruman as he should have been.‘

He became the leader Saruman was not, leading the efforts of the resistance as Saruman should have, have him not betrayed them all. So he was Gandalf, with either enhanced wisdom and power, or lifting part of his limitations, allowing him to use more of the might he already had within himself. You may say that he passed to be just a counselor to take a more active role in the defense of the Free Peoples, but he didn’t make anyone submit to his command, respecting the first rule of not becoming chieftain of Men and Elves.

As you can clearly see from this explanation, Gandalf the Grey was like living in some dream, without knowledge of what happened before, and thus, reducing his powers. While Gandalf the White was the same man, he was like waking from a dream that now looks like a very short time in his life, and with it getting all (or almost all) his powers and memory back. The conclusion is that Gandalf the White is much more powerful then Grey one, but we still don’t know all his powers.