Now, when talking about television rivalries, there is only a handful of those that can compare to the one that exists between Seinfeld and Friends, two of the most popular 1990s sitcoms around the world. Both were absolute phenomenons when they debuted, and both are still highly influential and very popular even today. In this article, we are going to explore the roots of the rivalry and tell you who the “sitcom king” is.

Seinfeld is by far the more important, influential, and better show than Friends. Although both have a lasting influence, Seinfeld was simply more bold and innovative at the time, with humor that cuts much deeper into the essence of postmodern life, where Friends was just a very entertaining sitcom.

What makes Seinfeld and Friends rivals?

This is a very interesting question and one of the most important ones in the history of American television in the 1990s. What makes these two shows rivals? This question becomes even more interesting in light of the fact that the two shows are quite different.

Sure, they share some common themes and seemingly even a common universe (connected via Mad About You), but their sensibilities are completely different.

While Seinfeld was more intellectual, postmodern, and even artistic in its approach to comedy, Friends always remained a light-hearted take on the life of several friends living in New York City. Seinfeld was a “show about nothing” and Friends were always a show about their protagonists.

The fact that they are rivals stems from their enormous popularity during the 1990s, as their runs coincided for a while, between 1994 and 1998. Seinfeld had already built a large fanbase, while Friends quickly attracted new fans and it is only natural for the two shows to be perceived as rivals.

They “fought” for the fans and for the ratings, and that benevolent rivalry become one of the most iconic ones in the history of television. It is, in fact, so iconic that even after 30 years, the debate is still ongoing and people still have the need to defend their favorite show. We shall now explore the rivalry further.

The “battle” in the 1990s was especially intriguing. Namely, the fifth season of Seinfeld, which aired during the 1993-1994 season, averaged just under 30 million viewers and was the third-highest raking show in the United States. This was the show’s last season before Friends debuted and it goes to show that the newcomers had a lot of ground to cover.

And they did it, rather quickly at that. Friends became a ratings phenomenon and they quickly came on par with Seinfeld and other popular shows of the time. But was it enough? Sadly for Friends fans, it was not.

Friends truly did become a hit show at the time, but it could never really compare with the numbers that Seinfeld brought in. In fact, the best it could do while Seinfeld was also on the air (1994-1998) was third place, with an average of 29.4 million viewers during its third season.

Friends was only once the number one show on television, and that happened during the 2001-02 TV season, when the show’s eighth season aired.

On the other hand, Seinfeld grew even bigger during their shared time on the screen. From 1994-1998 (when it actually ended), Seinfeld was always in the top two highest-ranked TV shows as per Nielsen, alongside the drama series ER, finishing as number one on two occasions, despite Friends being on the air at the same time.

Friends averaged 23.6 million viewers during the course of its total run, compared to Seinfeld‘s 26.6 million average.

As for the awards, neither Seinfeld nor Friends won big at the time, as the award for best comedy was reserved for Frasier, but even here, Seinfeld was a bit more successful than Friends: Seinfeld had a total of 10 Emmy wins and 68 nominations, while Friends had 6 wins and 62 nominations.

This is why the winner is Seinfeld.

Seinfeld is a “show about nothing” that has become a piece of television history. It not only became one of the most popular and influential sitcoms of all time, it also became one of the most important genre-redefining shows ever. Seinfeld changed sitcoms, it changed how sitcoms were written and filmed, and it became a pillar of modern pop culture.

As television historian, Jennifer Keishin said in an interview for The Business Insider: “The ‘nothingness’ that they talk about … is really nothing. It’s actually everyday stuff. And I think that’s what keeps us coming back to it, and that made it a hit, a fairly widespread mainstream hit at the time … they’re dealing with these everyday irritations that we all really relate to.” [1]

And this is what makes Seinfeld so amazing as a show.

Friends had a rough start back in the 1990s, but it quickly became a global phenomenon. Although some compared it unfavorably o Seinfeld, the show picked up the pace and became an inspiration for a lot of remakes and new shows around the world.

The show brought a lot of new elements into the world of sitcoms, but what really made it amazing were its characters. These guys, the principal friends from the show, were so likable and so popular that they actually defined a whole generation of television fans who wanted to be just like them, however unrealistic that might have been.

Friends brought on something new and fresh to television and this freshness has now become an enormous part of modern pop culture, which is why the show is so amazing.

Seinfeld vs Friends: Which show is better?

We’re sorry Friends fans, but Seinfeld is simply the better of the two shows. It is far more complex, it is far more universal, and far more artistic and innovative in its approach. Friends is just a sitcom, a story about some cool guys living in New York City and struggling in their relatively good lives. Seinfeld, on the other hand, is a show about reality and the actual struggles of everyday life.

It is much deeper, much more postmodern, and a show that even today fits the mold in every possible way. Melissa Blake, who watched both shows, wrote a brilliant opinion about the two for CNN and since we wholly agree with it, we’ll just quote parts of the text: [2]

Where “Friends” suffered from simplistic and generic storylines, “Seinfeld” remains one of the smartest and most unique sitcoms. In the 21 years since its finale, few, if any, shows have ever been able to replicate that same level of magic and ardent fandom. And what about its many contributions to the American lexicon? Do you ever say “yada, yada, yada?” Do you celebrate “Festivus?” Thanks, “Seinfeld.”Where “Friends” gave us unrealistic expectations of life in our 20s — a sort of hyperreality — “Seinfeld” was just real. On “Friends,” all the characters were airbrushed, beautiful people living in massive New York City apartments that far exceeded what even successful bankers could’ve afforded. On “Seinfeld,” however, the characters had messy — or not much — hair, dressed in jeans and T-shirts and lived in more normal apartments. (Though given how little they worked, it was hard to imagine how they afforded even those.)

And while we may have wanted to be as cool and chic as Rachel Green in “Friends,” in reality, we were all much more similar to awkward Elaine from “Seinfeld.” Just think about it in contemporary terms. If Rachel were a real person living in 2019, she would be an Instagram influencer posting her #OOTD full of #sponsored clothing from hip places like Madewell or J. Crew. If Elaine were a real person living in 2019, she would probably swear off social media — or use it to spy on her exes.But the differences don’t stop there. Where “Friends” is that show about a specific time in your life (your late 20s and early 30s), “Seinfeld’s” eccentric characters speak to all phases of life — and, as such, is the show I can always go back to, no matter how many years have passed. Once I aged out of that “Friends” demographic, I began to see the characters and their lives differently. In fact, I tried re-watching the series a couple years ago, and I couldn’t get beyond the first episode. They all seemed to spend so much time complaining about romantic relationships that would never amount to anything — and I just didn’t have patience for this kind of kvetching.

Blake wrote a truly beautiful take on the two shows and we can only agree with her when we state that Seinfeld is the absolute sitcom king when compared to Friends.

Did Friends steal from Seinfeld?

In a 2003 interview, Jerry Seinfeld accused the Friends creators of ripping off Seinfeld: “We thought, ‘They [Friends creators] wanna do our show with better-looking people. That’s what they’re doing here. (…) And we thought, ‘That should work.’” We don’t actually think that Friends plagiarized Seinfeld, but there are certainly enough similarities to say that the show took some elements from Seinfeld and that it owes part of its success to those elements in particular. [3] 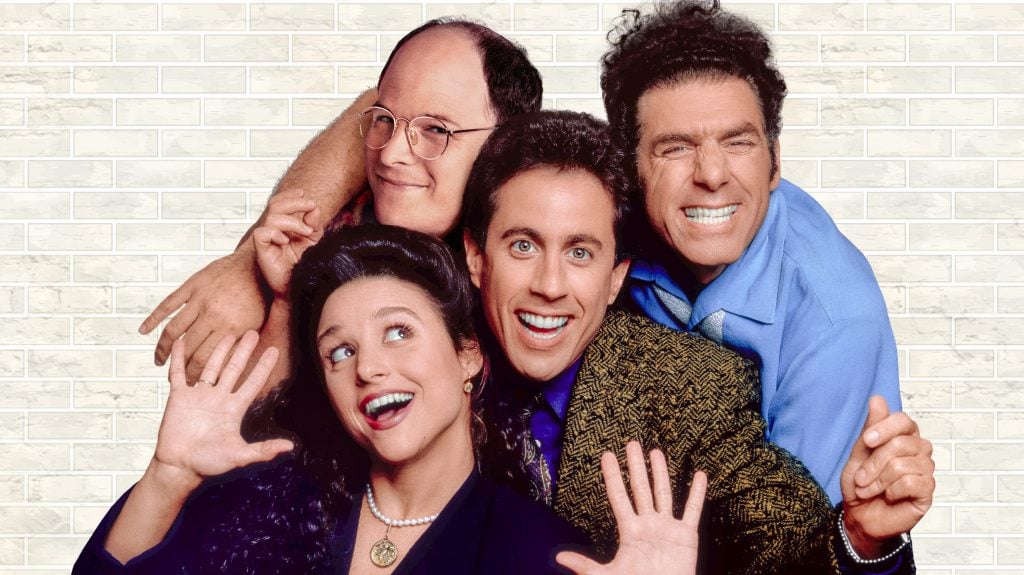