Encanto is an amazing animated film from 2021, created by Walt Disney Animation Studios. It was awarded an Academy Award for Best Animated Film, and rightfully so. The movie is embroiled with magic and fun characters – but also a sense of authenticity and a breath of Colombian history. So, what is Encanto actually based on?

Encanto is based on Colombian rural tradition and history riddled with war and aggression but also optimism and perseverance. Even the village, Encanto, was based on Colombian villages such as Barichara. Walt Disney Studios even hired a cultural consultant, Alejandra Espinosa.

They went to the tiniest details to make the movie feel as authentic as possible despite all the magic it revolves around. That even includes the fabric of the skirts that Mirabel and the rest of the Madrigals are wearing. Even the meaning of the word Encanto has several meanings, all of which can be connected and interpreted to fit the movie. Let’s dig in!

Table of Contents show
A Brief Synopsis Of Encanto
What Does Encanto Mean?
What Is Encanto Based On?

A Brief Synopsis Of Encanto

Official Walt Disney Animation Studios synopsis: “Encanto tells the tale of an extraordinary family, the Madrigals, who live hidden in the mountains of Colombia, in a magical house, in a vibrant town, in a wondrous, charmed place called an Encanto.

The magic of the Encanto has blessed every child in the family with a unique gift from super strength to the power to heal – every child except one, Mirabel. But when she discovers that the magic surrounding the Encanto is in danger, Mirabel decides that she, the only ordinary Madrigal, might just be her exceptional family’s last hope.”

The official synopsis paints a great picture of the plot of the film. What it doesn’t tell you, however, is how Encanto, Casita (the magical house), and Madrigals got their gifts. And that part of the story has the deepest connection to the real-life history of Colombia. It all started with Pedro, Mirabel’s grandfather.

Their village was attacked and burned to the ground. As they tried to escape, Pedro stopped to hold back the attackers and give his people enough time to escape. He was murdered right there, and the sorrow that his wife (Mirabel’s grandmother) felt, combined with the mystical powers of a nearby river, gave Madrigals their gift.

Mountains rose around them, and Encanto was born – a village safe from the outside world, living in harmony. Now, of course, there was no real-life place embroiled with magic, but the details of how Encanto came to be have many connections and references to Colombian history.

What Does Encanto Mean?

Before we dive into Colombian history, I’d first like to discuss the meaning of the word “encanto” itself and how perfectly it fits the narrative of the movie, regardless of what meaning of the world we’re looking at.

Encanto, as a noun, can mean “charm” or “enchantment.” If you take charm as the meaning of Disney’s Encanto, it paints the picture of the charming, loving village and even more charming Madrigal family that the story revolves around.

The loving, kind nature of the Madrigals also reflects the name of the film. In Spanish, when you want to say to somebody: “you’re so charming” or “you’re such a sweetheart,” you can say, “Eres un encanto.” That would perfectly describe Mirabel and the rest of the Madrigals, always ready to help and be thoughtful to others.

If you take enchantment as the meaning of the word, it clearly describes what Encanto in the movie is – an enchanted, magical, wonderful place. Even in real life, a small place with historical, traditional buildings and charming landscapes is sometimes described as an “encanto.”

Adding to that magical vibe, encanto can also mean a “spell,” just like the magical spell cast upon the village and the Madrigals. I love the play of words here because regardless of what meaning of the word encanto you take, it fits the movie perfectly.

What Is Encanto Based On?

Now, we come to the real-life inspiration behind Encanto. As I’ve mentioned, it all started with a Colombian village being attacked and innocent people running for their lives. It is somewhat inspired by Colombian history – especially throughout the 20th century – which was riddled with civil wars, colonialism, and never-ending conflict and violence.

The Colombian civil war’s exact date of beginning is somewhat blurry – some say it started in the 1920s, while others suggest it didn’t start before the 1940s or 1950s. Regardless, it lasted for almost a century and had over 200 000 estimated civilian casualties. Just like in Encanto, villages were burned, and people were killed – but it never took away their love and spirit.

As for the plot itself and the details surrounding it – such as the architecture or traditional clothing – were all meticulously studied and depicted with the help of Alejandra Espinosa, a Colombian woman who worked on the movie as Disney’s cultural consultant.

She was only supposed to give them a tour of her small town, Barichara, and give some pointers on how to make the movie more authentic. However, when they saw how passionate Espinosa was about making the film perfect, not being shy about telling them something isn’t right and needs to be changed, they decided to hire her as a consultant throughout the film.

In accordance with what they saw in Barichara and what Espinosa had suggested, Encanto was based on Barichara and other similar Colombian villages. The architecture truly reflected the traditional Colombian style of building, and the houses were authentic to those you could find across Barichara.

Espinosa also led Disney executives working on Encanto throughout Barichara and introduced them to its people. That included the stonecutters who paved the roads, the townfolks and their kitchen, and the women of Velez who made the traditional Colombian, colorful, vibrant skirts that became so recognizable because of Mirabel, Luisa, and other Madrigal women.

She even sent them the original fabric to feel the material, feel its weight, and see how it moves and floats about. But, one of the biggest emphasis that Espinosa suggested that Encanto should be based upon is the Colombian identity.

According to El Pais, Espinosa claimed: “It needed to be treated with a lot of respect, it’s very important because there is a huge stigma attached to Colombia, it is viewed as of little worth, like Mirabel [the movie’s hero]. We don’t know who we are, we are always looking for foreign cultural models to define ourselves. I always placed identity at the center of the debate.”

RELATED: 15 Movies Like Encanto You Absolutely Need to See

Even the idea itself that the miracle of Encanto came from the river is actually imbued into the Colombian tradition and identity. Water is something that is not only life-saving but sacred to the indigenous folk of Colombia.

The Madrigal family themselves is created to depict the diversity of the Colombian people, with Afro-Colombian folk, such as Dolores or Antonio, but also the indigenous Colombian people, like Bruno. Espinosa suggested that Bruno ought to be represented as somebody who’s there but made invisible and never talked about – just like the real indigenous people of Colombia.

As for Casita, the magical house of the Madrigals, believe it or not, the first idea was to have it be a classic Disney Castle. However, Espinosa, and eventually, the writers, believed it removed the Madrigals too far from ordinary townsfolk. So, it was replaced with a traditional Colombian house enriched with a magical touch.

And, the big door to the house that’s always open? Well, see for yourself.

Overall, thanks to Espinosa and her team, Encanto is easily one of the most authentic Disney animated movies ever created and one of the best, if you ask me. It has magical elements but is deeply rooted in Colombia’s tradition, history, architecture, beliefs, and folklore. 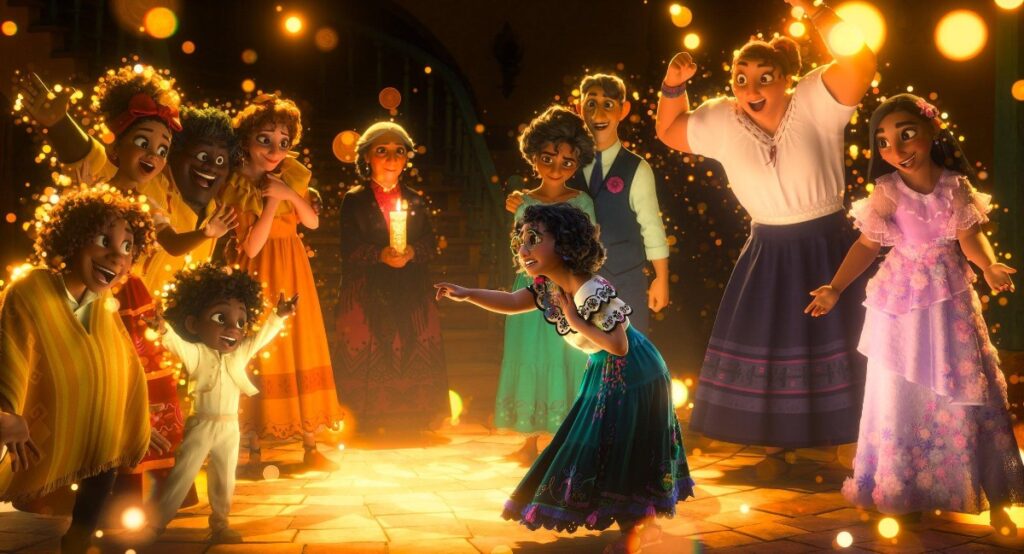 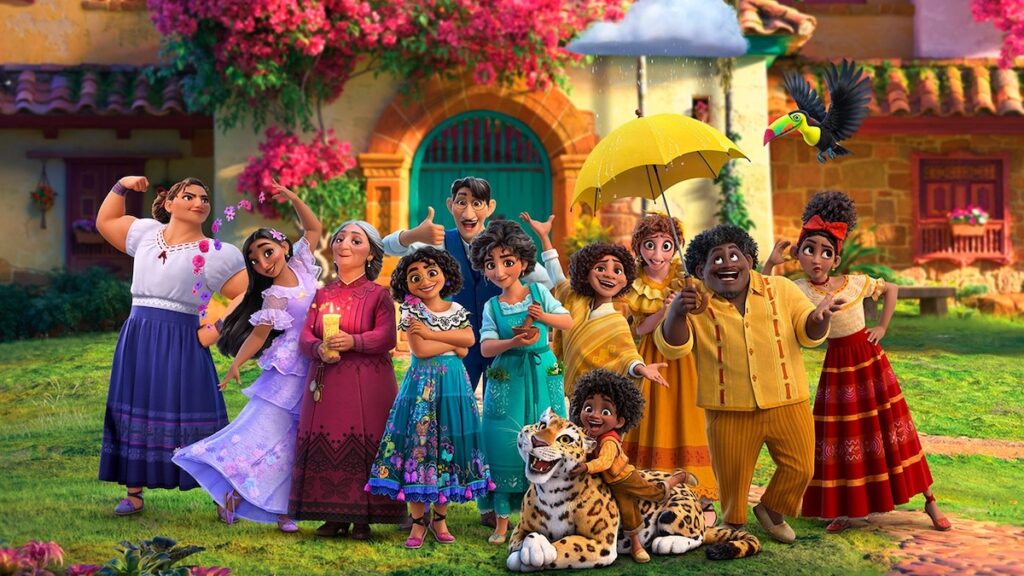 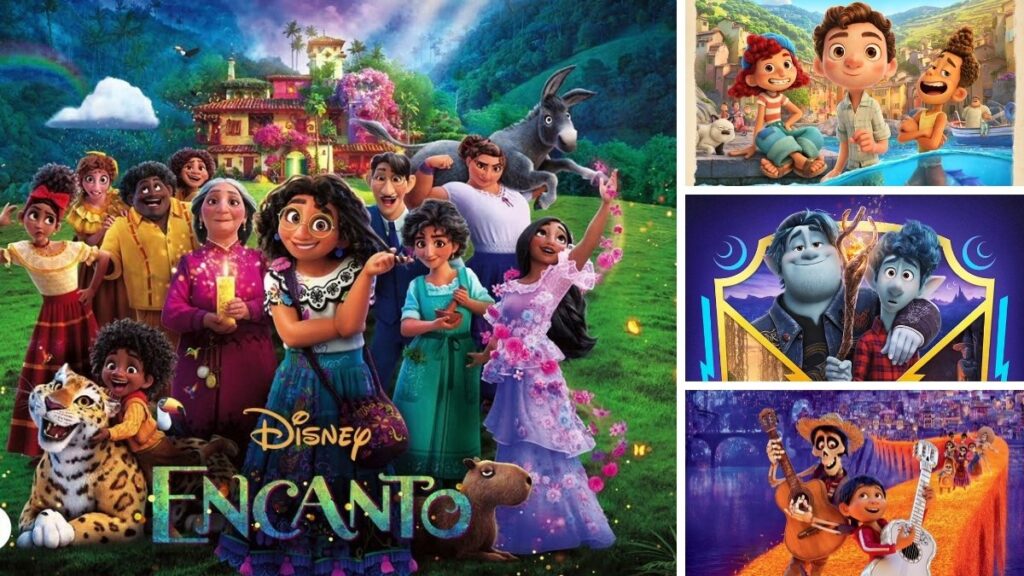