Galactus is an insanely powerful entity known as the Devourer of Planets. When he’s well-fed, there aren’t many beings that can go against him. However, his powers diminished when hungry, making him lose against many inferior opponents. On the other hand, Ghost Rider’s powers are mystical and vast, so if he ever fought Galactus, who would win, and why?

Ghost Rider could beat Galactus in a fight, even kill him, if the cosmic giant wasn’t fed and his powers were down. However, if Galactus is fully fed, his Power Cosmic goes to unfathomable heights. Although he might not have a way to kill Ghost Rider, he’d win that fight.

In the end, it would depend on which version of the characters are fighting each other. Johnny Blaze could take down a hungry Galactus, while Frank Castle’s Cosmic Ghost Rider might match up with a well-fed Galactus. It would all depend on the narrative of the story. Let’s check out their powers to see why that’s the case.

Ghost Rider And His Powers

Ghost Rider first appeared in Marvel Spotlight #5 in 1972. A stun driver named Johnny Blaze sold his soul to Mephisto in exchange for his father’s health, but Mephisto tricked him and fused him with a demon, Zarathos, making him become the first Ghost Rider we heard of in the comics.

He wasn’t the first Ghost Rider in history, though. There are numerous Spirits of Vengeance in existence, and when any of them merges with a human host, a Ghost Rider is born. They have similar mystical abilities that are beyond powerful. Let’s see what Ghost Riders can do.

Merging with a Spirit of Vengeance (or a demon, in Johnny Blaze’s case) gives the human host supernatural powers and physiology. When they are in human form, they remain the same as they always were. However, when changing into Ghost Rider, they aren’t human anymore.

Hellfire consumes their flesh, leaving them as skeletal figures with burning skulls. They become almost immortal and invulnerable to damage other than weapons from Heaven, regardless of how powerful an attack towards a Ghost Rider is. One might say Ghost Rider’s entire body consists of hellfire, which he can control and use against others.

RELATED: Ghost Rider vs Thanos: Who Would Win and Why?

Ghost Riders can revert back and forth between their human form and Rider form, granting them countless powers, including instant healing, traveling inter-dimensionally, and more. The dual physiology gives Ghost Rider superhuman strength, speed, stamina, durability, and reflexes when in Rider form, and normal human physiology when the host takes over.

As I mentioned, Ghost Rider can control hellfire to his will and use it any way he sees fit. The Spirit of Vengeance has an enchanted chain empowered with hellfire and a shotgun with similar properties. Only a single touch from Ghost Rider can incinerate a mortal and their soul, especially if the Rider senses evil in them and reaps them for vengeance.

Also, hellfire can be conjured from Ghost Rider’s body, especially his hands, including powerful blasts, beams, fireballs, etc. Even Rider’s bike is enchanted with hellfire, so he often uses it as a weapon.

Ghost Rider can ride his bike on any surface at any place, but what makes him so special is that he can also travel inter-dimensionally almost seamlessly. The Spirit of Vengeance comes from Hell, and he can travel between realms and dimensions at his will.

We know a lot about Ghost Riders, but their true nature and powers are still mysterious and unexplored. We can only tell what we see through their actions, but nobody can say with certainty where their limits lie.

The Penance Stare is one of Ghost Rider’s most powerful abilities. If he stares into one’s eyes, the Spirit of Vengeance can make them feel pain and remorse for all the harm they inflicted on innocent souls throughout their lives.

Galactus has lived for millions of years and taken billions upon billions of lives and souls while devouring planets. He does it for sustenance, though, and feels no remorse, so it’s hard to see how or why the Penance Stare would work, but if it does, such an incredible amount of pain and misery would destroy him.

Galactus And His Powers

Galactus is an unfathomably powerful cosmic entity who wields the Power Cosmic, one of the most powerful mystical forces in the universe. Galactus first appeared in Fantastic Four #48 as the only survivor after the destruction of the sixth iteration of the Multiverse.

He is known as the Devourer of Planets, as he turns planets into cosmic energy and consumes them for sustenance. He operates outside of the traditional understandings of moral or remorse – he does so to survive, not because he has a grudge against anybody. Here’s how it works.

The Power Cosmic is a supernatural cosmic force that Galactus wields. It’s extremely powerful and usually manifests in strong energy beams and blasts, but Galactus can use it in many ways, seemingly becoming omnipotent when he’s at or near full power.

He can manipulate cosmic energy in any way he can think of: telepathy, telekinesis, molecular restructuring, resurrection, transmutation, invulnerability, and much more.

When Galactus is well-fed with cosmic energy from devoured planets, he becomes one of the most powerful beings in the universe, easily matching Celestials (a well-fed Galactus once defeated numerous Celestials simultaneously) and other omnipotent cosmic entities.

RELATED: Galactus Vs. Celestials: Who Would Win And Why?

That’s why he had lost battles against enemies who are regularly much weaker than him when he’s well-fed, like The Thing, Rick Jones, and even Squirrel Girl, who beat the entity with – friendship?

As I mentioned, Galactus devours planets to feed. He doesn’t physically chomp down on a planet like a cupcake. Instead, he uses his vast powers to turn the planet into cosmic energy and then consumes it to feed.

That means Galactus has the power to obliterate an entire planet and all the beings living on it in a second. He can eat millions of souls at once – and that’s an everyday thing for him, not because he’s evil, but simply to survive. That just tells you what kind of power to cosmic entity has.

If it’s still unclear how powerful Galactus is, all you need to do is look at his heralds. Galactus learned that it takes too much time and energy to roam the universe himself in search of new planets to devour, so he started choosing herald. Galactus picks a being and bestows them with a fraction of his Power Cosmic to travel the universe and find him planets to devour.

The first such herald was the Silver Surfer. He has only a fraction of Galactus’ powers, and he’s still one of the most powerful beings ever to visit the Earth, capable of unfathomable strength, faster-than-light speed, and much more.

If his heralds are so powerful – and only have a fraction of the Power Cosmic – it’s easy to see why a well-fed, fully-powered Galactus is one of the most powerful beings in the universe.

Ghost Rider Vs. Galactus: Who Wins?

In the end, Galactus would win against Ghost Rider more often than not, provided that he’s well-fed and not weakened with Cosmic Hunger. When at his best, Galactus is one of the most powerful beings in the universe.

Despite Ghost Rider’s mystical powers that protect him from harm, Galactus could simply fling him across the universe and simply take him out of the battle – you don’t need to kill someone to win a fight against them. However, it’s not all black-and-white. Ghost Rider not only has a chance against Galactus, but he’d certainly win in some situations.

First of all, Galactus is a being of pure science. Even if it might seem magical or unfathomable to humans, Galactus’ existence and powers are purely scientific. That, however, makes him vulnerable to magic, and Ghost Riders’ powers are at least mystical, if not magical, so there’s a big possibility he could hurt Galactus.

If Ghost Rider battles a hungry, weakened Galactus, he’d probably trump him, but then it would just be a plot device to establish how powerful Ghost Rider is.

Now, the Penance Stare shouldn’t work on Galactus because he’s not really an evil entity. He operates outside of the mortal, traditional moral senses and only feeds on planets to survive, not because he wants to kill.

Galactus feels no remorse for his actions. Also, it’s unclear if he has eyes and a body, or is it just a form the entity takes so that mortal beings can comprehend him, as his true form is too abstract. However, we’ve seen it work in the Fantastic Four animated series. Sure, it’s not canon, per se, but still – Penance Stare worked on Galactus.

RELATED: How Powerful Is Lifebringer Galactus?

If we consider the Penance Stare working, then it would be one of the most powerful attacks anybody ever inflicted on anybody else. Galactus lived for millions of years, devouring countless planets with billions of souls. Imagine feeling all that pain and suffering at once? It would crumble the cosmic entity to dust.

Finally, suppose we’re taking Frank Castle’s Cosmic Ghost Rider, who Galactus bestowed with a fraction of the Power Cosmic on top of Rider’s regular powers. In that case, you get a being who could certainly match Galactus, even beat him.

When they encountered Thanos with the Infinity Gauntlet, the Mad Titan easily decapitated Galactus but couldn’t kill or harm Cosmic Ghost Rider. Instead, he struck a deal with Castle to join Thanos. That would suggest Cosmic Ghost Rider is at the same power level, or even above Galactus. Still, those are all what-if scenarios.

In a straight-up fight, at their normal power levels (moderately-fed Galactus, Johnny Blaze’s Ghost Rider), Galactus would probably win against Ghost Rider more often than not. There are scenarios where the tables could turn, but if you go with that logic, then anybody could beat anybody in the comics universe. 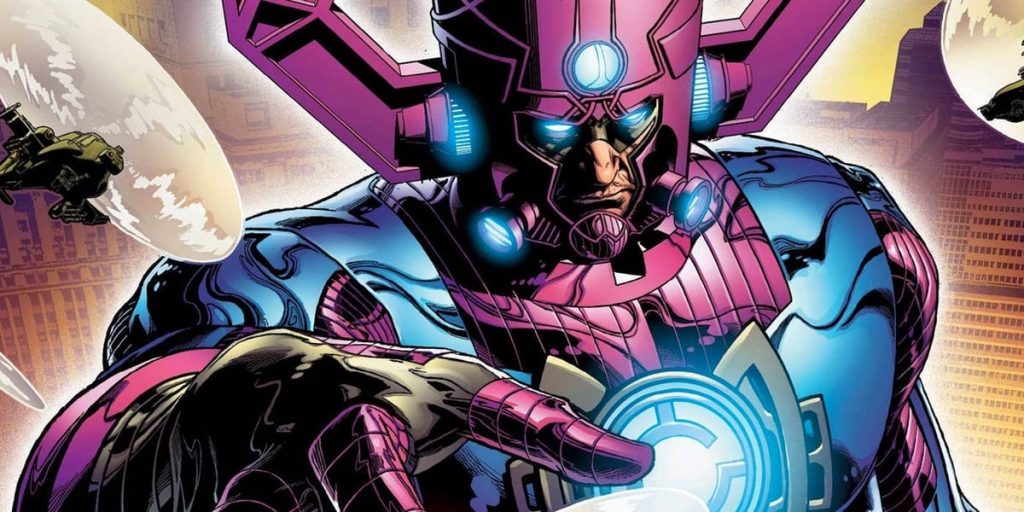 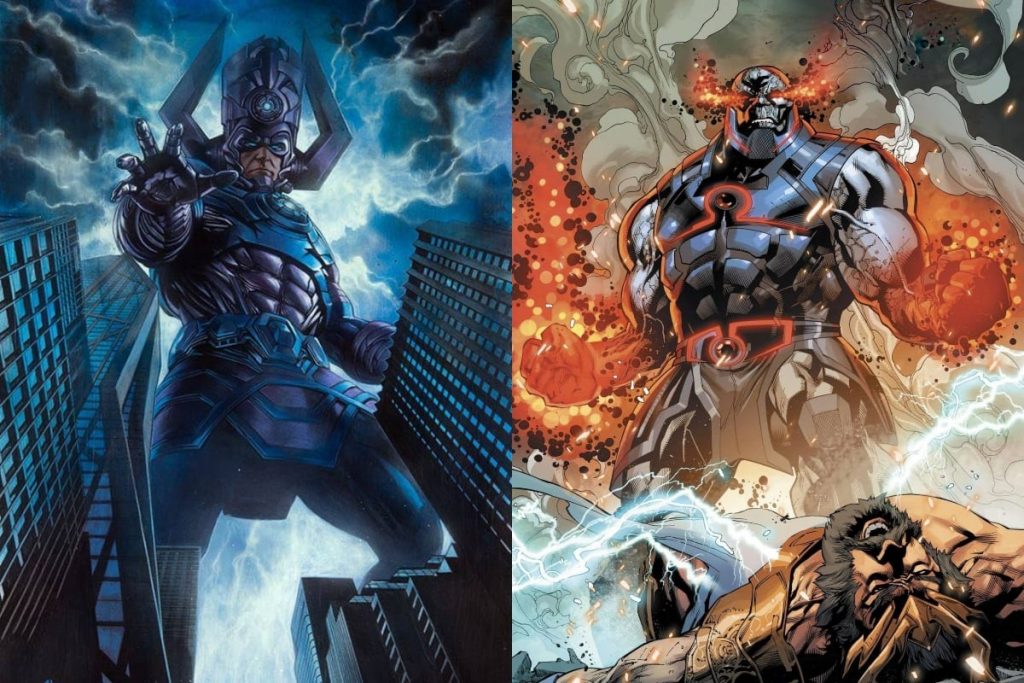 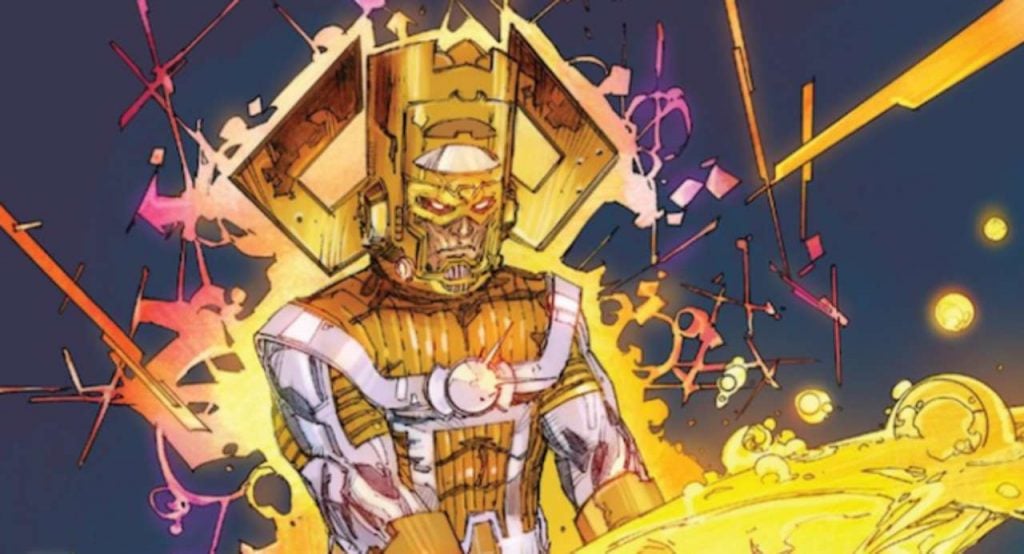